A Laser More Powerful Than A Star 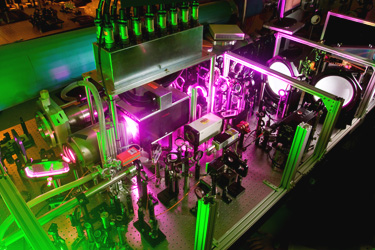 In use since 2008, the Texas Petawatt Laser is the world’s most powerful laser. It is housed in the sub-sub-basement of the math and physics building at The University of Texas at Austin. For a small fraction of a second (1/10 of one trillionth of a second), this laser can produce light that is brighter than the surface of our sun. Todd Ditmire, Director of the Center for High-Intensity Laser Science said, “For a small area, for a small instance we have the brightest light in the universe.”  It is 2,000 times more powerful than the sum of all power plants in the US.

Ditmire knows the ins and out of petawatt lasers, having worked on the first petawatt laser Lawrence Livermore National Laboratory in California. Although that laser was actually more powerful than the Texas Petawatt, the Livermore laser was discontinued in 1999. However, the Texas Petwatt (due to changes made by Ditmire) is more effective than it’s Californian counterpart. The Texas Petawatt works by dividing up a laser beam with a very small energy factor into different colored beams with different wavelengths. These divided beams are then bounced off amplifiers to speed them up. Then, the divided beams rejoin in a compressed state; this creates an intense pulse.

“That’s how you do the experiment,” Ditmire said,  “We observe what happens. We take snapshots of explosions.” These are highly controlled nuclear fusion explosions. Despite its enormous power, the Texas Petawatt laser is very safe. It cost $14 million to build the laser, and was mainly funded by National Nuclear Security Administration, a division of the Department of Energy.

A Nearby Asteroid Contains More Than $11 Trillion in Precious Metals