The fourth-tallest building in San Francisco continues to sink after sinking over 17 inches already. Engineers are working to quickly find a solution to save the multimillion-dollar condos inside the building.

One of the largest luxury towers in the San Francisco area is rapidly sinking, and engineers don't know how yet to fix the problem. Since being finished, the building has sunk 17 inches (43 cm) and tilted 14 inches (36 cm) toward the street.

Millennium Tower is a high-rise luxury residential complex. It rises 58 stories over the San Francisco area, featuring the Bay Area's Financial District. At 645 ft (197 meters) tall, Millennium Tower is the fourth-tallest skyscraper in the city. It contains over 400 multimillion-dollar condo units.

The building was completed in 2008, and it includes some of the best amenities in the San Francisco area, including a wine cellar and tasting room, pristine restaurants, separate movie theater, and state-of-the-art fitness center. When Millennium Tower first opened, it sold $100 million in condos in just five weeks, according to the San Francisco Chronicle in 2007. Those units ranged anywhere from $1.6 million to over $10 million. The grand penthouse of the building sold for $9.4 million. However, the average multimillion-dollar condo has lost its value by an average of $320,000 per unit.

Residents of Millennium Tower aren't happy for a number of reasons. First, their homes are literally sinking into the ground and no one in San Francisco wants to take on the billion-dollar blame. Second, officials knew since 2010 that Millennium Tower was sinking. However, they didn't start telling residents until June 2015 when the building had already sunk a full 16 inches and tilted forward 2 inches. The city maintains that Millennium Tower is still perfectly safe for its residents, but those who live in the complex weren't happy they waited nearly five years to get the heads up.

Millennium Partners, the company who developed the high rise, blames nearby construction. The group largely points fingers at the Transbay Transit Center, a transportation hub that broke ground in 2010. A terminal developed by Transbay Joint Powers Authority included a 60-foot hole for the train tunnel. And according to Millennium Partners' engineers, the biggest issue was that the new terminal removed too much groundwater while building the tunnel.

Transbay Joint Powers Authority released a statement saying that their company isn't to blame. Rather, the transportation company blames the Millennium Tower's use of concrete for construction rather than steel as a reason the base is shifting. Furthermore, the company also said the faulty foundation started moving shortly after it opened in 2008.

"The net pressure of the Millennium Tower loads the Old Bay Clay stratum that lies 90 feet below ground level below the tips of the piles used to support the 10-foot thick mat foundation of the Tower," Transbay wrote. "These pressures are much larger than those caused by any adjacent buildings and likely caused the Old Bay Clay to enter a highly sensitive under consolidated state. This load has contributed to the excessive settlement at the Millennium Tower prior to the start of any underground construction of the Transit Center and has reduced the capability of the Tower to withstand any reduction in water table, regardless of the cause of that reduction in water table." 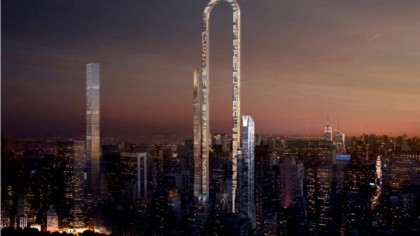 In order to fix the foundation, engineering firms in the area estimate that the cost will run $100 million to $150 million. While that sounds incredibly pricey, it's still cheaper than the billion dollar price tag that some engineers predicted for the issue.

Whatever the solution, engineers have to work fast. The Bay Area remains one of the most likely places in the United States to experience a volatile earthquake in the next few years. This is especially bad for Millennium Tower because it sits on soil prone to liquefaction rather than firmer ground.