Planetary scientist may have finally found an explanation to Uranus’ weird axial tilt.

From the jokes to impressive facts, Uranus is probably one of the general public’s favorite planets. Besides its comical name, Uranus is a rather odd planet. Just like its surrounding moons, the massive planet tilts on an axis of about 90 degrees.

Even more strange, the planet's magnetic field is even set at a tilt. So, why is this? Scientists may have finally discovered why.

Research put together by Durham University's astronomy researcher Jacob Kegerreis, presented earlier this month, indicates that an object twice the size of planet earth may be responsible for Uranus’s peculiar tilt.

The current theory is that a large rock object or even planet collided with Uranus, enveloping the planet in rock in a matter of hours.

Even more interesting is the fact that this same object may still be residing somewhere in the solar system, which some researchers speculate is the missing planet X, now still circling the sun well beyond Pluto.

Uranus’ collision happened 3 billion to 4 billion years ago, potentially even before the planet even formed its moons. The collision could also be responsible for the planet’s current frigid temperatures.

Though not officially confirmed yet, getting a probe out to Uranus is a major priority for planetary scientists at the moment.

The planet itself is one of the coldest planets in the solar system. As the seventh planet from the Sun, the planet orbits the sun at a distance of 2.88 billion km. Uranus averages a temperature of 76 K but can drop as low as 47 K.

Even more interesting, the planet has well over 20+ moons orbiting the ice giant with each little natural satellite comprised of mostly ice and rock. 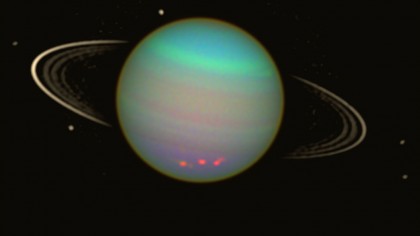 The Discovery of Uranus and Why Is It Such an Oddity

Taking its name from the Greek God of the Sky, Uranus gets a lot of flack for its name, nevertheless, the planet is actually correctly pronounced  YUR'-uh-nus not the other way you may be thinking.

The planet has only been visited once. On January, 24th 1986, NASA’s Voyager 2 conducted its closest approach to Uranus passing within 81,000 km of the cloud tops of the massive planet.

As planetary scientist prepared for more trips towards the planet, it will be interesting to see what researchers will learn about the planet in the near future.