A new direction for solar? The potential of solar car parking 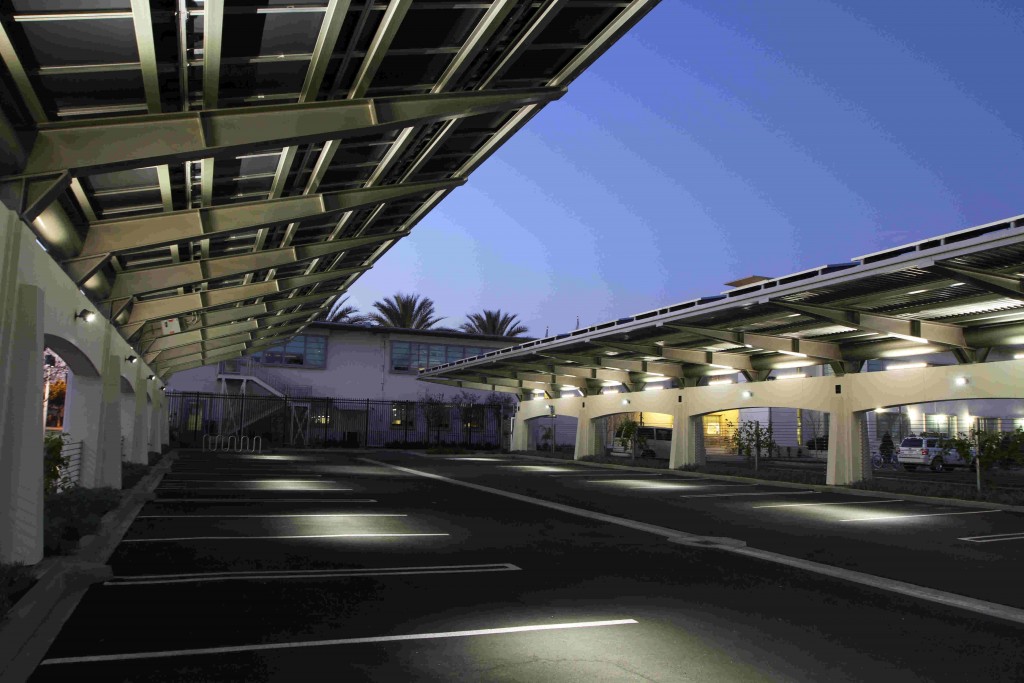 According to research by Lawrence Berkeley National Laboratory, most cities in the US consist of 35 to 30 percent tarmac and concrete, 40 percent of which consists of parking space. Given that tarmac and concrete both absorb solar energy, they are both major contributors to the ‘urban heat island effect’ which makes cities hotter than the areas around them.

Solar panels can drastically reduce the urban heat island effect, as well as being a major contributor to tackling climate change. Therefore a really good way of utilizing them in cities is to cover car parking spaces with them.

Solar car parks (or ‘carports’ in the US) consist of car parking areas that have a canopy erected covering the parking spaces. The roof of this canopy is either formed from, or covered with, solar PV panels. They can be constructed using a variety of solar PV technologies besides the usual crystalline silicon, including thin-film glazed panels, which enable light to pass through to the parking spaces beneath the canopy and can operate in low and ambient lighting conditions. The support structures for conventional car parks can vary, some companies supply centralized steel uprights that adds to the amount of parking space and helps to reduce the risk of accidents. Others, particularly in the US where solar car parks are becoming increasingly popular, can be tall enough to allow the parking of trucks, as well as cars, beneath them.

They can deliver multiple advantages to consumers, besides delivering large amounts of renewable power to the customer and for export to the grid. For example, the canopy protects the cars and their occupants from the elements and also from heat, which means that occupants don’t have to return to a baking hot car after having finished their shopping. The canopy keeps the cars cool. Furthermore, according to the US Department of Energy, the cooling effect of the canopy adds to vehicle efficiency through elimination of the need to switch on the air conditioner.

Multi-storey car parks can utilize BIPV (Building Integrated Photovoltaic), which means that mounting systems and ground works are unnecessary. Finally, solar car parks can be made into an attractive feature that advertises the site’s support for environmental technology.

Solar car parks can also be combined with electric vehicle (EV) charging stations and hydrogen fueling stations and other green building systems can be incorporated into their construction, such as LED lighting and rainwater recycling systems.

Unfortunately, solar car parks are fairly expensive. In the UK, prices start from £2,500 per parking space.

“It’s the most expensive type of system to build” said Chase Weir of TruSolar, speaking to The Washington Post. “A lot more engineering, a whole lot more steel, more labour, and therefore, it’s a relatively small percentage [of solar power]…but it is growing, and the cost to install a solar canopy today is less than the cost to install a rooftop just a few years ago.”

The average payback period (in the UK) is about 12 years and there are various additional financing options available. Nevertheless, according to Scott Moskowitz of GTM Research, which conducted a study of the sector in August 2014, there were only about 600 MW of solar canopies installed in the US and so it is still somewhat of a niche market. In general, it is only large companies that can afford to install them, such as Munich RE, Dow Jones & Co., and Staples, for instance. Large hotels, such as the Phoenician in Arizona, also appear to be fairly keen on them. The array at the Phoenician is the first of several to be installed in the future by owners Starwood Hotels & Resorts Worldwide Inc., in association with NRG Energy. It was unveiled in January this year and will ultimately consist of 2,000 PV panels. Another large installer is the Washington Redskins FedEx Field where 841 parking spaces generate enough power to supply 20 percent of the stadium’s electricity demand on match days and all the power on non-match days.

The amount of energy they generate depends according to the amount of space covered and the particular type of solar technology. However, the solar car park at Rutgers University in Piscataway, New Jersey, USA, covers an area of 28 acres and generates 8 megawatts (MW) of power, which is enough to supply 1,000 homes. Sydney Solar Markets Car Park in Flemington, a suburb of Sydney, Australia, which accommodates 71 car parking spaces, generates 235,594 kilowatt hours per year, equivalent to removing 199 small cars from the road and representing enough energy to power 70 households. This system also incorporates a solar data monitoring system which enables engineers from Autonomous Energy, which constructed the array originally, to monitor the performance of the panels in order to ensure it continues to perform efficiently and to provide quick and effective maintenance. The company provides maintenance and performance reports are regularly provided to the client.

Laurence Mackler, Founder of Solaire Generation, says his company has installed 50 MW of carports across the country. Costs have fallen over the years but the growth of solar carparks is still restricted in certain states, depending on the economic factors involved. For this reason, in the US at least, solar car parks have only really appeared in Arizona, New Jersey, Maryland, Massachusetts, New York and California, according to a market research report in 2014 carried out by GTM Research.

In the UK, solar car parks could be given a springboard by the hostile attitude taken by the government, in that, according to Peter Bennett, writing in Solar Power Portal earlier this year, the industry is now looking at alternatives to solar farms and at larger scale. This means that large areas of rooftop might come into play, but that depends also on the effect that recent subsidy cuts will have on the sector as a whole if they are implemented in January 2016.

According to Andy Walsh, general manager roof & carport sales at Belectric, solar carparks could be attractive to companies with heavy electricity bills, particularly retail stores, on the business that they may go down well with customers due to the protective feature of the canopy.

Ray Noble, winner of the Solar Power Portal Outstanding Achievement Award 2014, speaking to Solar Business Focus UK, said that the area of supermarket car parks, in relation to the area of the store building itself, is usually one and a half times greater. Given that the store roof often has a number of obstacles which would allow only about 50 percent of the roof to be covered, the associated car park represents double the opportunity for solar generation.

“Solar carports are still in their infancy but they will definitely grow” said Chris Bratherton, business development manager at Ecolution Renewables, who has installed a 49.95kWp (kilowatts peak) solar carport project in South East London, speaking to Solar Power Portal. “There are two scenarios: you have the local authorities and the big businesses who have already filled their roof spaces with solar who will be more open to more solar, they will be further along the chain and will be looking for additional productive space. And then you’ll get people whose businesses are already linked to electric vehicles or car parking – the Bluewaters of this world. If you look at the shopping centre, the roof is mostly glass domes or skylights and their car park area is enormous.”

However, Bratherton also believes that it will take time for solar carparks in the UK to compete effectively with roof-mounted solar, for the simple reason that the market isn’t yet sufficiently developed, but he also believes that they could benefit British solar installers by giving them the opportunity to build a unique set of skills. According to Ray Noble, the UK construction industry could also potentially design a very economic structure that would be very attractive.

Indeed, a number of large companies are looking at solar carparks, which means that if the sector survives the government cuts, there could be substantial opportunities lying in wait in the years ahead.