A new research found that our beds are 10 times filthier than that of Chimpanzee’s.

When we think about the primates, we often see them as simple beings who do not share any advanced cognitive abilities with us. We take pride and consider ourselves to be advanced in every possible way. But are we actually?

The scientist swabbed samples from the nest of chimpanzee and compared it with the one of a human. The results were quite shocking as they found out that only 3.5 percent of the total bacteria in its nest came from its body, but the same for humans were 35%.

The impurities found in both the chimpanzee nest and the human bed included sweat, saliva, skin, and feces. The researchers also found out that the number of parasites like fleas and tick was also lower in the nest of our primates cousins.

“We know that human homes are effectively their own ecosystems, and human beds often contain a subset of the taxa—or types—of organisms found in the home. For example, about 35 percent of bacteria in human beds stem from our own bodies, including fecal, oral and skin bacteria” said, Megan Thoemmes, lead author and a Ph.D. student at North Carolina State University. 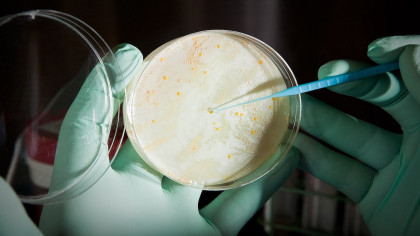 But one should understand that there are stark differences between the bed of a human and chimpanzee and we are not talking about the silk weave!

Chimpanzees make a new bed every night as opposed to humans who maintain the bed for quite a long time. So you can easily make out that there won’t be enough time for the impurities to build up in the bed of our primates.

But for us, we give the beds sufficient time to collect what we shed every single night. This leads to quite a substantial amount of dead skin debris and another form of parasites like dust mites.

Also, the human bed is isolated from outside bacteria, and this leads us to sleep mostly on our own filth. “we have created sleeping places in which our exposure to soil and other environmental microbes has all but disappeared, and we are instead surrounded by less diverse microbes that are primarily sourced from our own bodies,” the authors wrote in the study.

If you think that it is good to keep our beds isolated from the outside world, it is actually harmful in the long run as it leads to Hygiene Hypothesis. A condition where our bodies become too clean and won’t be adept enough to fend off common bacteria and germs.

“In some ways, our attempts to create a clean environment for ourselves may actually make our surroundings less ideal,” Thoemmes said in the press release.