South Korea's famous rescue robot Hubo cut through a brick wall to deliver the Olympic torch to the next recipient.

Olympic torch processionals are ceremonies filled with prestige. Typically, a country's leaders, celebrities, national heroes and community members come together to run the torch from city to city before reaching its final destination. This year's torch passing for the Pyeongchang Winter Olympics in South Korea got quite the unprecedented addition -- a robot. But for South Koreans (and fans of robotics), this wasn't just any robot. This robot was Hubo.

Hubo symbolically passed the torch in front of the Korean Advanced Institute of Science and Technology (KAIST) in Daejeon. KAIST researchers brought Hubo to life in 2005 under the expertise of Professor Oh Jun-ho. In 2015, the KAIST team brought home a $2 million USD prize in robotics in a contest held by a Pentagon research agency. The key to the team's success? Hubo and his family of humanoid rescue robots.

In a world of increasingly terrifying robots that could take over the world (looking at you, Sophia), Hubo's display at the Winter Olympics torch transfer was a breath of fresh air.

Hubo walks toward a brick wall emblazoned with the Winter Olympic torch relay logo on it. Hubo takes the torch from Professor Dennis Hong who was the founding director of the Robotics and Mechanisms Laboratory at UCLA. Hubo then gives Hong a ride to the torch passing location.

But wait! An obstacle 'blocks' the path. Hubo, a robot designed for rescue operations, is clearly prepared. He takes the flame from Hong, walking slowly toward the wall and only stumbling a few times. Hubo then drills into the wall and passes the torch to his 'father' Professor Oh Jun-ho. 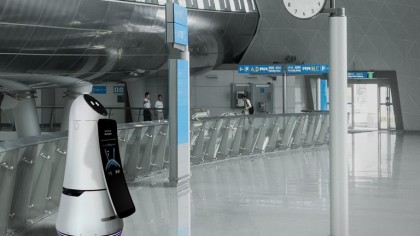 But the endearing awkwardness did not stop there. Professor Oh then presented the flame to a young aspiring scientist sitting in KAIST's latest robot. The FX-2 robot is entirely human-operated and massive when compared to Hubo's size and stature. The FX-2 weighs over 600 lbs (272.2 kg) and stands at over 8 ft tall (2.4 m). Hubo is just 47 inches tall and can walk 65 paces per minute.

Hubo only traveled about 500 feet (roughly 150 meters) with the torch, but he didn't have to go far to make a statement about the advancement of South Korea's robotics programs. Pyeongchang 2018 Organizing Committee President Lee Hee-beom called the stunt a "display of innovation and creativity."

Hubo is actually one of 85 robotics assistants that will appear throughout the 2018 Winter Games, according to news outlet Yonhap which helped unveil the decision earlier this month. The robots will vary in abilities, functions and programming, Yonhap reported.

"Speaking robots will provide information on event scheduling, places to go sightseeing and transportation in four languages -- Korean, English, Chinese and Japanese -- and paint robots will draw murals on the walls of stadiums during the games, [the Ministry of Trade, Industry and Energy] said," Yonhap noted in their report.

The man responsible for orchestrating and developing these 85 robots for the Olympics? Hubo creator Oh Jun-ho.