A UK-based engineering team developed a new style of hydrogen combustion engine that they say is the world's first in a towing truck.

A team of engineers based out of Liverpool have developed a new hydrogen-fuelled, zero-emission truck that could hit roads soon.

The truck is the joint product of a partnership between hydrogen specialists at ULEMCo and Innovate UK. The technology modifies Volvo's popular FH16 truck in order to demonstrate just how powerful hydrogen fuel can be in transporting heavy cargo loads.

This particular hydrogen vehicle differs from others as it's a Mega Low Emissions (MLE) truck, according to its makers. This means that hydrogen powers the vehicles using a combustion engine rather than fuel cells and an electric motor.

ULEMCo engineers pointed out that in 'traditional' hydrogen cars, the hydrocarbons still put out emissions that impact the air quality (i.e. particulates and carbom monoxide). However, the MLE truck doesn't emit these elements through its more conventional engine model.

ULEMCo developers said by using traditional engine and truck designs, they can bypass the transformation needed for electrification. Thus, the time frame to the goal of zero carbon emissions is reduced while also significantly minimizing the cost of change for customers.

"We are hugely excited about the potential for hydrogen fuel as a route to faster achievement of zero carbon emission in commercial vehicles," said Amanda Lyne, CEO of ULEMCo. "With this MLE demonstrator, co-funded by the UK’s innovation agency, Innovate UK, we are showing that 100% hydrogen fuel in combustion engines is a practical and cost effective option. It sits well alongside the hydrogen dual-fuel conversions that we have already implemented commercially."

This isn't ULEMCo's first transformation from a diesel engine into a hydrogen-fueled creation. Several of their creations are still active throughout the UK. This particular vehicle, however, will be the first all-hydrogen product. It's set to have at least 300 horsepower with 17 kg of hydrogen on board. It's also expected to have a range of 300 km when unloaded.

Currently, the company wants to work with large fleet owners to retrofit their present fleets -- especially those which operate in urban areas. ULEMCo noted in a press release that those first retrofit plans could include garbage collection trucks and local deliveries, instances where it would be relatively easy for a truck to return to its station to refuel. 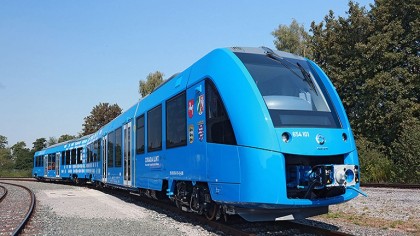 For many car companies looking to invest in hydrogen-powered vehicles, fueling becomes one of the biggest issues. Electric vehicles are slowly starting to expand the infrastructure of charging stations around various parts of the world. However, companies like Toyota (which produced the hydrogen fuel-cell powered Mirai) are struggling to make hydrogen-powered cars more mainstream.

The ULEMCo team behind this new truck hope that someday very soon, the public's opinion around hydrogen-powered trucking could be close to how major companies have embraced Tesla's electric semi trucks.