Cosmic rays have been spotted shooting up from Antarctica and they are unlike anything we have ever seen! The rays may have crucial implications in modern physics.

The poles of the Earth are home to many wonders of the world. One among them is the passage of cosmic rays from space to the Earth. To be more precise, the cosmic rays are high energy particles that come from the deepest parts of space.

These fall towards Earth and some of them get through the atmosphere and into our planet. Poles experience the most amount of rays, as magnetic fields of force near the equator repel most of the rays that come near that area.

However, these cosmic rays that enter through the poles do not cut through the cross-section of the Earth and come out of the other poles. The reason being that cosmic rays comprise of large diameter particles.

Even if they have the energy to pierce right through the Earth, they will get deflected by hitting other particles inside the Earth’s core.

Discovery of the discrepancy thanks to ANITA and IceCube

But things started to change; scientists have noticed an aberration near the poles. It all started way back in 2009 when scientists noticed cosmic rays shooting up from the Earth’s pole.

The same phenomenon happened in 2014; scientists came to know about these occurrences using NASA’s Antarctic Impulsive Transient Antenna (ANITA). It is a monitoring device that floats over the South Pole that is used to measure the intensity of the cosmic rays by measuring their decay.

Since the cosmic rays that shot up from earth don’t match with the behavior of our standard reference, the Standard Model (SM) of particle physics, researchers are considering the possibility of a new type of cosmic ray that we are not aware of.

There is more evidence to support this matter as the ground station present in the pole, called IceCube, showed that these rays are indeed different. Scientists have made some assumptions on what these particles are.

Some made the argument that these are sterile neutrinos, large diameter neutrinos that have never hit another particle on their way through the Earth. Another group of researchers believes that these rays are cosmic radiations coming from the inside of Earth due to the decay of dark matter present inside our planet.

New study sheds some light into the matter

A study paper guided by Derek Fox makes the argument that these rays are in fact different from what we usually know. 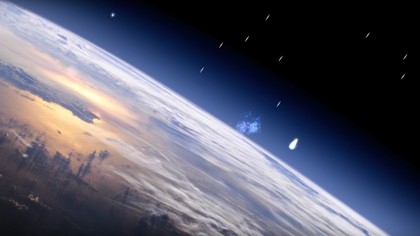 “I was like, ’Well this model doesn’t make much sense,’” Fox told Live Science. “But the [ANITA] result is very intriguing, so I started checking up on it. I started talking to my office neighbor Steinn Sigurdsson [the second author on the paper, who is also at Penn State] about whether maybe we could gin up some more plausible explanations than the papers that have been published to date.”

With the data collected by the researchers, they are of the opinion that these rays are not neutrinos. In fact, by studying the parameters, Fox and his team believe that these rays have a probability of 1-in-3.5 million chance of being part of the Standard Model.

To the question “then what are these things?” the researchers think that they might be theoretical supersymmetric particles called “stausleptons.”

More research needs to be done based on the data collected by ANITA and IceCube. Who knows, we might be in the brink of discovering something new that might rewrite astrophysics as we know it!