The autonomous robots have already succeeded in maintaining stable flight and doing complex acrobatics! They are programmed with the movements of threatened flies.

Insects are among nature’s best flyers, so it’s easy to understand why scientists took them as a reference for creating a flying robot. When reviewing the flight pattern of an insect, it becomes apparent that they are very efficient in their operation. 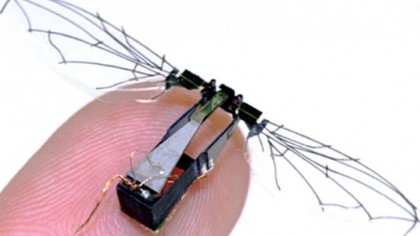 Due to their small size, they need that level of efficiency as too much effort is going to burn out their energy reserves rather quickly.

The researchers at the TU Delft’s Micro Air Vehicle Laboratory (MAVLab) took this as inspiration and created an autonomous flapping wing robot - DelFly. There are many perks to having a flapping wing system when compared to a thruster, as the flapping wings are more efficient in controlling movement in midair.

The result is an autonomous flying robot that is very agile and maneuverable.

Coming back to their inspiration, the researchers were fascinated by the efficient movement of the insects. The inspiration for the DelFly comes from the common fruit fly which can flap its wings 200 times a second.

The researchers couldn’t come close to these values, but the DelFly is capable of 17 beats per minute, which is sufficient to maintain flight and facilitate rapid changes in the flight pattern.

"The robot has a top speed of 25 kilometers per hour (km/h) and can even perform aggressive maneuvers, such as 360-degree flips, resembling loops and barrel rolls. Moreover, the 33-centimeter wingspan and 29-gram robot has excellent power efficiency for its size, allowing five minutes of hovering flight or more than a one km flight range on a fully charged battery," said Matej Karasek, the designer of the robot.

Getting there, one step at a time!

Once the researchers were able to get the DelFly off the ground, the next challenge was to teach the DelFly the mannerisms of its reference, the fruit fly. The researchers programmed it with the flight motions of a housefly when it is threatened.

The result was surprising as the DelFly closely mimicked the movements, even performing steep banking at midflight. "When I first saw the robot flying, I was amazed at how closely its flight resembled that of insects, especially when maneuvering," said research collaborator Prof. FloriaMuijres from the Experimental Zoology group of Wageningen University & Research.

The future of the autonomous flying robots sure looks bright as the success with the DelFly is just a start. When compared with drones, the flying robots with flapping wings possess more agility and the ability to make rapid escape movements.

"Insect-inspired drones have a high potential for novel applications, as they are light-weight, safe around humans and are able to fly more efficiently than more traditional drone designs, especially at smaller scales. However, until now, these flying robots had not realized this potential since they were either not agile enough – such as our DelFly II – or they required an overly complex manufacturing process," said  MAVLab scientific leader Prof. Guido de Croon.