Adidas to Only Use Recycled Materials in Products by 2024

The sportswear maker said using recycled plastics would affect all elements of its brand -- from shoes to sports bras to popular shirts.

By  Shelby Rogers
Jul 18, 2018
The Ultraboost Parley LTD shoes from Adidas use plastics recycled from the ocean Adidas

Adidas announced it would only use recycled materials in its products by 2024.

The pledge specifically said the company would eliminate "virgin" plastics. This goes beyond the company's iconic shoes, as the pledge would affect the company's use of polyester. With that in mind, Adidas shirts, shorts, leggings, shoes and more would be entirely recycled by 2024.

According to reports, Adidas also expects to see growth in their recycled plastics shoe line called Parley. The Parley shoes maintain the standards, performance, and look of Adidas's more traditional shoes, but the shoes themselves are made with plastics that were almost ocean litter. Adidas expects the purchases of those shoes this year to be five times what they were last year -- from one million pairs of shoes sold to 5 million. 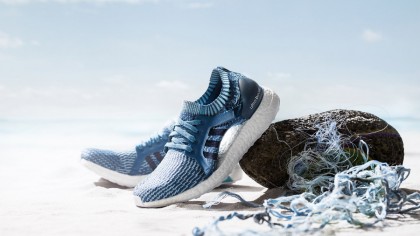 Adidas isn't the only company looking to get rid of plastics. Designer Stella McCartney and her label have decided to stop the use of new nylons by 2020. Other companies are banning plastics whenever they can. Starbucks recently announced its elimination of plastic straws, opting instead for a sleek plastic lid in order to reduce the overall plastic used in drinking a beverage. McDonald's is starting to use those lids in other parts of the world while also exploring initiatives to make all of its food containers recyclable.

Entire countries are rather forcefully encouraging their manufacturers and companies to stop using plastic bags in sales transactions. For example, the Kenyan government recently voted to institute harsh punishments for those caught using and distributing plastic bags.

All of this comes as global use of plastics continues to rise. The use of plastics has increase 20-fold over the last half of the century, and that number is only expected to get higher. Some reports have said there will be more plastic than fish in the ocean by 2050. More than 70 percent of the plastics made by us humans winds up in a landfill or in the waterways of the world, and making plastics accounts for 6 percent of the world's oil consumption. By 2050, that number is expected to rise to 20 percent.

Your Guide to Products and Technologies That Are Pseudoscience