Aerospace giant Boeing is hosting a GoFly competition. The international contest looks to find the greatest ideas for personal flying devices, and GoFly will hand out over $2 million to teams around the world.

Jetpacks, solo drones, and maybe even personal wings -- no idea is too crazy for a new competition hosted by some of the biggest names in aerospace.

Boeing will serve as a grand sponsor for a global competition to find the next great personal flying device. The GoFly competition is a two-year international search with prizes totaling $2 million for winning creations.

Gwen Lighter serves as the CEO for GoFly. In addition to the $1 million grand prize, GoFly will offer additional prizes during it's final "Fly-Off" event. There will be one $100,000 prize for "disruptive advancement of the state of the art aviation technology" (which sounds like a prize for the so-crazy-it-just-might-work idea). 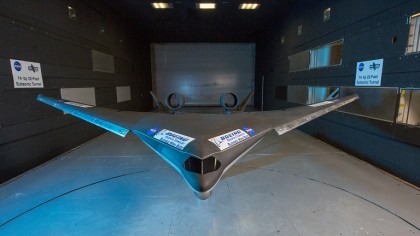 Boeing's Future Blended Wing Body Aircraft Back in the Tunnel

"There is perhaps no dream more universal than the dream of human flight. GoFly is going to make that dream a reality," Lighter said. "GoFly is a shift towards embracing innovative solutions to expand the desire to explore the unknown and push ourselves to new heights. Today we look to the sky and say 'look at that plane fly,' but two years from now we’ll look up and say 'look at that person fly.'"

The competition isn't just tailored for degree-bearing engineers. GoFly invites hobbyists, students, and passionate aviators to submit their ideas. Making a personal flying device into a reality sounds like a daunting task for even the most skilled engineers. However, GoFly wants to make the development process a little easier by providing teams with access to some of the top experts in aerospace engineering. These "mentors and masters" are available to all teams by giving seminars on various subjects as well as offering one-on-one advice. Mentors include Lockheed Martin's Skunk Works executives, Cape Air engineers, DARPA researchers, and (of course) Boeing developers.

There are three phases toward the final $1 million prize. Phase I's deadline is April 4, 2018. Phase I awards up to 10 $20,000 prizes based on a report explaining the concept.

Phase II has a deadline of December 8, 2018, and rewards four of those 10 concepts with $50,000 based on revised reports from Phase I. Teams will also have to demonstrate significant progress in the concept before heading to Phase III -- the grand Fly-Off.

"The GoFly Prize competition aligns with our company’s goals of inspiring people across the globe and changing the world through aerospace innovation," said Boeing Chief Technology Officer Greg Hyslop. "We’re excited to see how the visionaries of the future will take on this ambitious and exciting challenge."

This doesn't necessarily mean that Boeing will start churning out winning personal devices as soon as the contest ends. However, it does mean that gadgets like jetpacks will be back in the spotlight. No doubt that in a global competition, the world will hear of some incredibly unique ideas through this program.