After the Apple II, the World Was Never the Same

Long before the iPhone, Apple changed the world when they introduced us to an entirely new idea: the personal computer.

Prior to 1975, personal computers were solidly the domain of engineers and computer science researchers armed with hot irons, circuit boards, and individual memory modules painstakingly soldered into place to expand a systems available memory by a few kilobytes. Before the decade was out, the Apple II would sit on desks and tables in millions of American homes, used for everything from business to playing games—all by people who couldn’t tell a logic gate from a garage door.

This revolutionary machine changed what people expected from the computer and invented a market that no one had known was possible. For the first time ever, Apple had put computers in the hands of the average American family, and our families were never the same again.

The Humble Origins of Apple Computers

Steve Jobs worked at Atari in 1975 while his friend, Steve Wozniak, was building calculators for Hewlett-Packard when the direction of history took a turn.

Wozniak had just begun to take an interest in the nascent home-brew computer scene that was building up out in California when he attended his first meeting of the Palo Alto Homebrew Computer Club in 1975.  The experience was inspiring enough that Wozniak threw himself into the work of building his own home-brew computer immediately after.

When Jobs saw Wozniak’s creation, he was impressed and asked him to build a model that they could sell. Jobs went out and sold his Volkswagen Minibus to help finance the project.

If soldering switches and memory modules to a circuit board had its Da Vinci, it would be Wozniak, and this project would become his first major work.

Initially, Wozniak had worked with a Motorola 6800 CPU to power his machine but soon switched to the vastly cheaper MOS 6502, which was not only 1/7 th the price of the industry standard 6800, it also required less supporting hardware, bringing the cost of building the system down to a commercially feasible level.

In May 1976, Jobs and Wozniak attended the monthly meeting of the homebrew club and they brought along the first computer their new company, Apple Computers, ever produced, the Apple I.

It lacked a case, a display, hard drive, and other components of a modern system, but the Apple I was a complete board, with CPU, memory, and peripheral ports, not unlike the Arduino boards you can buy for $30 today. What’s more, the 1Mhz 6502 processor was supported by 4Kb of RAM (upgradable to 8Kb), and an optional interface could allow read/write capability to a cassette tape.

While they were still selling the Apple I, Wozniak began to build their next system. Inspired by Jobs’ work at Atari—which he sometimes helped with—, Wozniak wanted to build a system that could play the Breakout game that he and Jobs had made for the company. This required output to a colored display, sound, peripheral ports and expansion ports for new hardware, which Wozniak dutifully incorporated into the new system.

The design of the system, however, was what concerned Jobs. He wanted it to be enclosed in a case that wasn’t intimidating and wasn’t some ad hoc wooden cabinet. The visionary design sense that Jobs was known for began to emerge when he worked on the Apple II, a Michaelangelo to Wozniak’s Da Vinci.

The Apple II hid the wires that cluttered existing systems, included a keyboard as a built-in peripheral, and could be connected to the television sets in people’s homes with a simple RF adapter switch which was available at any local Radio Shack.

The computer would come preassembled in a case that looked more household appliance than any computer system anyone had ever seen.

What’s more, Jobs sought a market for the Apple II where no one else would consider. While other computer manufacturers were busy trying to get the attention of discerning hobbyists and businesses, Jobs went to school districts and sold them on the Apple II until schools around the country were putting them in computer labs for their students to use, raising an entire generation of Americans on Apple products in the process.

Released in 1977, the Apple II would go on to sell more than 2 million computers in a few short years in a country where a couple of decade earlier, the number of computers in use in the United States probably numbered in the tens of thousands.

The End of the First Era of Apple

Apple had seemed to firmly establish itself as the premier personal computer company of the era and there was no reason to expect that to end, so the rapid decline in Apple’s fortunes is nearly as incredible as its rise.

The problem with success is that it has a way of focusing the minds of your competitors like nothing else. IBM saw what Apple had accomplished, and the sea change then taking place, and decided they weren't going to be left out.

In 1981, they introduced the IBM PC, a direct challenge to the Apple II. There is a lot to say about the IBM PC, but the key feature was actually what ran it.

IBM had struck a deal—arguably the most infamous one in the history of the computer industry—with a fledgling software company called Microsoft to license their new operating system. Agreeing to a non-exclusive license under the branding of PC-DOS, IBM felt that they were in a solid position to take on the Apple II.

Between the upstart Apple and the corporate, monolithic IBM, neither saw the threat they actually faced. If Wozniak was Da Vinci and Jobs’ the Michaelangelo in this story, then Bill Gates was nothing short of the computer industry’s Otto Von Bismark. 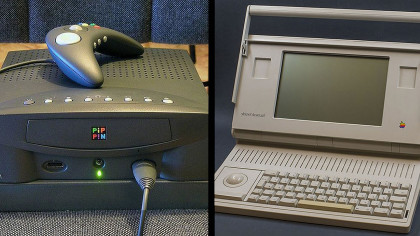 Within a decade Microsoft systematically conquered the computer market with their operating systems, running it on anyone’s hardware who was willing to license it. Software written for Microsoft's systems could not run on an Apple system without rewriting much of the code, and since most computers were running Microsoft, Apple's fate was seal, at least for many years.

Though Apple would continue to innovate in major ways, it would be more than a decade before Apple recovered. Jobs left Apple after a bitter dispute with the CEO turned ugly in 1986, but he would return in the late 90s for the comeback story of all comeback stories, helping to turn a company on life-support into the most profitable company on Earth.

That is an entire article on its own, however, so for now its enough to appreciate Apple’s incredible first act and the historical significance of the Apple II as the computer that launched the personal computing revolution.