A new open-source platform can analyze how pathogens infect human cells with the same efficiency as a highly-trained biologist.

A new AI-driven platform can analyze how pathogens infect our cells with the same accuracy as a highly-trained biologist. Developed by scientists at the Francis Crick Institute and UCL, the platform called HRMAn ('Herman'), will assist biologists in diagnosis and research.

SEE ALSO: THESE 7 AI-POWERED DOCTOR PHONE APPS COULD BE THE FUTURE OF HEALTHCARE

HRMAn, known by its full name, Host Response to Microbe Analysis, has been made open source and is easy to use. The platform can be altered for different pathogens, including Salmonella enterica.

HRMAn works by using deep neural networks to find complex patterns in images of pathogen and human ('host') cell interactions. It is able to identify the same characteristics that scientists analyze by-hand.

"What used to be a manual, time-consuming task for biologists now takes us a matter of minutes on a computer, enabling us to learn more about infectious pathogens and how our bodies respond to them, more quickly and more precisely," says Eva Frickel, Group Leader at the Crick, who led the project.

"HRMAn can actually see host-pathogen interactions like a biologist, but unlike us, it doesn't get tired and need to sleep!"

To show off the power of Herman, its project team used it to analyze the body's response to Toxoplasma gondii. This parasite is most famously linked to cats and specifically cat poop. More than a third of the world's population is thought to carry Toxoplasma gondii.

For the test study, researchers in the Crick's High Throughput Screening facility collected over 30,000 microscope images of five different types of Toxoplasma-infected human cells and loaded them into HRMAn for analysis. HRMAn was then able to detect and analyze over 175,000 pathogen-containing cellular compartments. 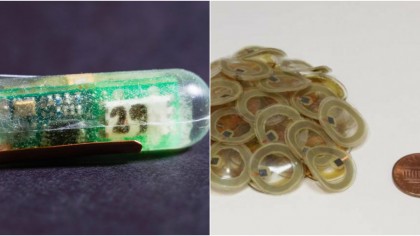 It could provide its users with detailed information about the number of parasites per cell, the location of the parasites within the cells, and how many cell proteins interacted with the parasites, among other variables.

"Previous attempts at automating host-pathogen image analysis failed to capture this level of detail," says Artur Yakimovich, Research Associate in Jason Mercer's lab at the MRC LMCB at UCL and co-first author of the study.

"Using the same sorts of algorithms that run self-driving cars, we've created a platform that boosts the precision of high volume biological data analysis, which has revolutionized what we can do in the lab. AI algorithms come in handy when the platform evaluates the image-based data in a way a trained specialist would. It's also really easy to use, even for scientists with little to no knowledge of coding."

Open source and easy to use

The open source and easy to use nature of the tool means it can have a wide range of applications in medicine and research.

"Our team uses HRMAn to answer specific questions about host-pathogen interactions, but it has far-reaching implications outside the field too," says Daniel Fisch, Crick Ph.D. student and co-first author of the study.

"HRMAn can analyse any fluorescence image, making it relevant for lots of different areas of biology, including cancer research."