USC scientists have developed a robot that can correct itself after tripping.

Researchers from the University of Southern California (USC) have developed a robot leg that can correct itself when tripped, even though it was never specifically programmed to do so. The phenomenal breakthrough is inspired - like so much of science and technology - from nature.

SEE ALSO: 13 PROSTHETIC ARMS AND LEGS AND MORE THAT APPEAR TO HAVE COME FROM THE FUTURE

For animals like giraffes and wildebeest, being born in the wild on open plains means threats to your life start early. That’s why these creatures have evolved so their juvenile species can begin to walk within minutes of birth.

This remarkable evolutionary trait has inspired robotics engineers to create an AI-powered robotic leg that can recover from trips instantly. The bio-inspired design uses a powerful algorithm that can learn a new walking task after only 5 minutes of unstructured play.

It can then develop and adapt to new tasks without additional specific programming. Their research could lead to a new generation of prosthetics and robots that can quickly adapt to changing terrains and environments.

Change no biggie for animal-inspired bots

Such agile robots could have huge impacts on sectors like search and rescue and space exploration.

"Nowadays, it takes the equivalent of months or years of training for a robot to be ready to interact with the world, but we want to achieve the quick learning and adaptations seen in nature," said senior author Valero-Cuevas.

USC Viterbi School of Engineering doctoral student Ali Marjaninejad explains that the robot learned to walk in a way similar to human babies, by first being allowed to explore and begin to understand its environment through free play or what it is known in the robotic engineering world, 'motor babbling.'

"These random movements of the leg allow the robot to build an internal map of its limb and its interactions with the environment," said Marjaninejad. Unlike other robots who are fed large amounts of data prior to trying a task,  this robotic leg learned by doing.

This is a huge breakthrough because, while engineers can program for a huge range of tasks and scenarios, there is no way they can possibly predict everything, which means a robot that relies on programming will eventually fail. On the other hand, the new USC robot learns from doing so can adapt to change on the go. 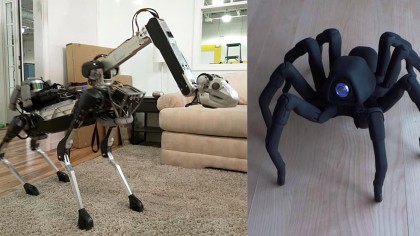 "However, if you let these [new] robots learn from relevant experience, then they will eventually find a solution that, once found, will be put to use and adapted as needed. The solution may not be perfect but will be adopted if it is good enough for the situation. Not every one of us needs or wants -- or is able to spend the time and effort -- to win an Olympic medal," Marjaninejad says.

Fascinatingly, the robots each learn in their own way. They begin to understand their own limbs and environments and from there can begin to manipulate themselves for locomotion. But as each robot finds success slightly differently, they also develop personalized walking patterns or gaits.

"You can recognize someone coming down the hall because they have a particular footfall, right?" Valero-Cuevas asks. "Our robot uses its limited experience to find a solution to a problem that then becomes its personalized habit, or 'personality' -- We get the dainty walker, the lazy walker, the champ... you name it."

The ability for robots to learn habits or adapt to style could make a huge impact on prosthetics. Imagine a leg prosthetic that learns and can then mimic the movement of its owner.

"Because our robots can learn habits, they can learn your habits, and mimic your movement style for the tasks you need in everyday life -- even as you learn a new task, or grow stronger or weaker,” Valero-Cuevas said.

The researchers will continue to develop their work developing ways for robots to be more independent and quick learning like their animal counterparts.

"The ability for a species to learn and adapt their movements as their bodies and environments change has been a powerful driver of evolution from the start," said Cohn, a doctoral candidate in computer science at the USC Viterbi School of Engineering.

"Our work constitutes a step towards empowering robots to learn and adapt from each experience, just as animals do."