In yet another display of "anything you can do, robots can do better," an artificial intelligence program almost defeated one of NASA's top drone pilots in a head-to-head drone race.

Researchers with NASA's Jet Propulsion Laboratory in Pasadena, California tested a drone flown by an artificial intelligence system against one of NASA's professional pilots. The race was funded by Google, and the entire event was two years in the making. Google partnered with JPL to explore further into the challenges and benefits of autonomous flying. One day, JPL wants to use the programming and AI navigation to assist with spaceflight.

"We pitted our algorithms against a human, who flies a lot more by feel," said Rob Reid of JPL, the project's task manager. "You can actually see that the A.I. flies the drone smoothly around the course, whereas human pilots tend to accelerate aggressively, so their path is jerkier."

The human pilot in question? World-famous drone pilot Ken Loo. NASA brought in the champion pilot and gave him one of three custom-built drones. All three drones had names inspired by the Dark Knight himself: Batman, Joker, and Nightwing. Each drone was built to racing specs. They could all fly up to 80 mph in a straight line at max speed. However, the Jet Propulsion Laboratory wasn't going to set up just any easy obstacle; they wanted to put the AI (and Loo) to the ultimate test. In the JPL warehouse, the drones only ever topped at 30 to 40 mph before needing to brake and go into yet another turn.

"This is definitely the densest track I've ever flown," Loo said. "One of my faults as a pilot is I get tired easily. When I get mentally fatigued, I start to get lost, even if I've flown the course 10 times."

Compared to Loo, the AI pilot was considerably more cautious and consistent in its trajectory. The autonomous drones used a unique algorithm integrated with Google's Tango technology, and the AI constantly took in information about its environment to learn and readjust in real time. However, the AI at several points lost touch with the drone because it was moving so fast. NASA noted in its statement that the AI-driven drones are still a work in progress.

So who came out on top, man or machine? 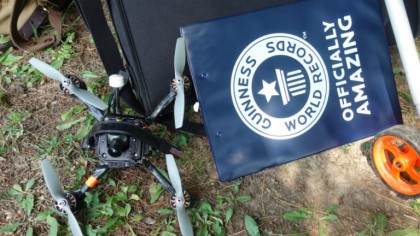 As NASA reported, "while the A.I. and human pilot started out with similar lap times, after dozens of laps, Loo learned the course and became more creative and nimble. For the official laps, Loo averaged 11.1 seconds, compared to the autonomous drones, which averaged 13.9 seconds."

The human might've come out on top this time, but the Jet Propulsion Lab team hinted that we shouldn't expect this outcome for much longer. As AI improves, the team noted that using AI for drone flying could become a normal occurrence.

"Our autonomous drones can fly much faster," Reid said. "One day you might see them racing professionally!"