Aiguille du Midi, Home of One the Longest Cable Cars in the World

Aiguille du Midi in France is one of the most beautiful places in the world. Nestled in the French Alps, you'll need to take a cable car to reach it.

Aiguille du Midi in France is one of the most breath-taking locations in the World. It is a stunningly picturesque rocky peak in the Mont Blanc region of the French Alps that stands an impressive 3842m above sea level. It is famed the world over for its magnificent 360-degree views that it provides for its thousands of visitors each year. Aiguille du Midi is commonly translated as "Needle of the Mid-day" or "Needle of the Noon" or, likely more correctly, "Needle of the South".

Visitors need to take a cable car to reach the summit of Aiguille du Midi where they are finally greeted with a viewing platform, a cafe, and a gift shop. The cable car was installed in 1955 and, at the time of completion, held the world record for highest cable car for just over 20 years. Despite losing this title it is still recognized as the highest vertical ascent cable car in the world from 1035m to the summit.

The idea of installing a cable car at Aiguille du Midi was first dreamed up by two Swiss engineers in the early 1900's. It would later come to be known as Téléphérique de l'Aiguille du Midi. They had planned to link the small town of Les Pelerins with the summit. Sadly this project hit some serious technical problems and was later aborted. In 1924 the Les Pelerins to La Para section of the lift was completed by a French Company, Funicular Railways.  A second La Para to Les Glaciers section was completed in 1927. At the time this was the highest cable car in the world. The outbreak of the Second World War, as well as the completion of the Planprax to Brevent cable car, led to the decline in popularity for Aiguille du Midi. This popularity declined to such an extent that it was closed in 1951.

During the mid-1950's an Italian Engineer, Count Dino Lora Totino was summoned to help rebuild and extend the existing cable car. Four years later and the refurbishment work was completed and a new Aiguille du Midi cable car was opened to visitors once again.

How to reach the summit

To reach the summit a budding visitor will need to start their journey from Chamonix to Plan de l'Aiguille du Midi at around 2317m. The next stage of the ascent takes visitors to the upper station at 3,777 meters. This second stage has no support pillars. 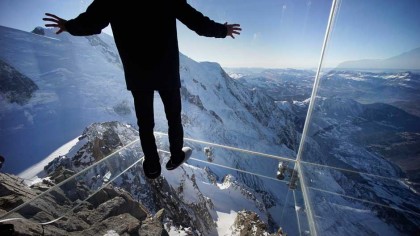 Crazy glass box over French Alps not for the faint hearted

The second level of the trip is elevating from Plan de l'Aiguille to the second station at 3777m. The final meters to the top are passed via elevator. The final stage requires visitors to take an elevator to the summit to complete the trip. The second section of the cable car is around 2867 meters when measured directly, but only 2500 meters if measured horizontally. This means that it is still, to this day, the second longest span width of any cable ar. The journey from Chamonix to the top of Aiguille du Midi takes about 20 minutes and means intrepid visitors are carried over 2800 meters. Ticket prices vary from 190 Euros for a family of 4 to free for under 5's.

If you fancy taking the trip it is advised that wear warm clothing, sunglasses, and sunscreen. Even in summer, the temperature can reach -10 degrees centigrade. Under three's are forbidden from making the trip and under 5's are not recommended. The trip takes around 20 minutes but it does have a stop on the way to the Plan de l'Aiguille. The average visitor should allow around 2 to 3 hours to complete their journey there and back and have sufficient time to take in the sights at the summit. Timetables and frequency of departure of cars can vary according to the time of year and, of course, demand.

It's not lonely at the top

Once at the summit guests are treated to some of the most beautiful panoramic the Alps has to offer. Whilst here they can soak it all in on the viewing platform whilst feeding their appetites in the handy cafe. There is even a gift shop to buy some permanent reminders of your visit. You can also check out, if your feeling brave enough, the glass skywalk called the "Step into the Void". This bridge opened at the top of Aiguille du Midi peak in December of 2013. This bridge gives you a stunning (literally and figuratively) view of the 1035 meter drop directly below. There is also "Le Pipe" a tubular walkway that completely encircles the summit.

Whether you have a penchant for cable cars or simply love remote places, Aiguille du Midi is a must-see destination. Both the ascent and descent, not to mention your time at the top, rewards you with some of the most beautiful landscapes in the world. Although you can spend the time and money riding the cable car you could, if that way inclined, reach the summit the good old-fashioned way - with ropes, hooks and muscle power.

Facebook's Subsea Cable Will Become the World's Longest at 28,000 Miles