The Be Power Tech company recently designed an air conditioner so efficient,that not only does it provide cooling, but it can also generate enough electricity to create potential revenue. The device makes use of some high tech, currently used technology such as a heat/mass exchange, while also implementing some new techniques that could see it become the most efficient air conditioner yet. 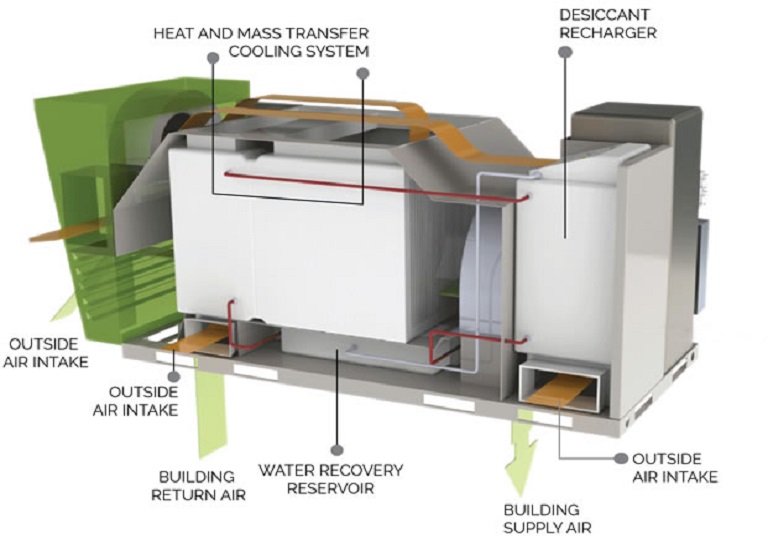 Example of the proposed system [Image Source: Be Power Tech]

The system works by entrapping warm humid air and introducing it into a dehumidifier inside a mass transfer device (HMX). A liquid desiccant, or a high concentration of salt, is then added into the HMX. The salt then absorbs the humidity from the air, initiating the water to start an equilibrium process to balance the salt and water concentration.

The salt solution, after absorbing moisture, has a slightly reduced concentration of salt due to the water. It is pumped to an evaporation device that removes much of the humidity. In the process of evaporation, the salt solution heats up, requiring outside air and water to cool it down in an isolated environment. The air is then heated, seemingly contradicting the cooling initiative.

To cool the air, it enters another HMX device and is split off into two separate streams. One stream is introduced with water which once again makes use of evaporative cooling to reduce the temperature of the air. The other stream, in a contained environment, passes through a heat exchanger where both streams converge but do not mix. The heat is pulled out, thereby cooling the dry air before it is once again introduced into the building.

Naturally, to create the mechanism necessary to achieve cooling, electricity must be used to initiate and maintain the high concentration salt solution and circulation of water. Therefore, a fuel cell is used to provide the electricity necessary to maintain the function of the device. Natural gas is used and combusted to turn stored chemical energy into electricity through a generator. The by-product of the engine is water, heat, and C02- two of which are reintroduced and utilized again from within the system.

The heat is used dehumidify the liquid desiccant, where the water vapor is then recovered. According to the company, the air conditioner uses less electricity than is created with the fuel cell. The left over electricity can then be put back into the grid or utilized within the building where the rest of the cost of the natural gas can be recovered.

The excess of energy is even reportedly higher in value than the cost of the gas, which would turn the mechanism not only into cost savings but rather into cost earnings.

According to Be Power Tech, each BeCool device can help protect and restore the environment.

They report on their webpage.

The BeCool system is also said to reduce Co2 emissions by 53%, while reducing toxic chemicals by 100%. They also lay claims that the machine can produce 5 kW of electricity, while also reducing the electrical load by 70% when compared to a conventional air conditioner. The system requires no harmful refrigerants that can pollute water supplies- often used within many air conditioners and refrigeration units. Also, using the heat generated from the motor, the device can work in reverse, providing heat during the winter. 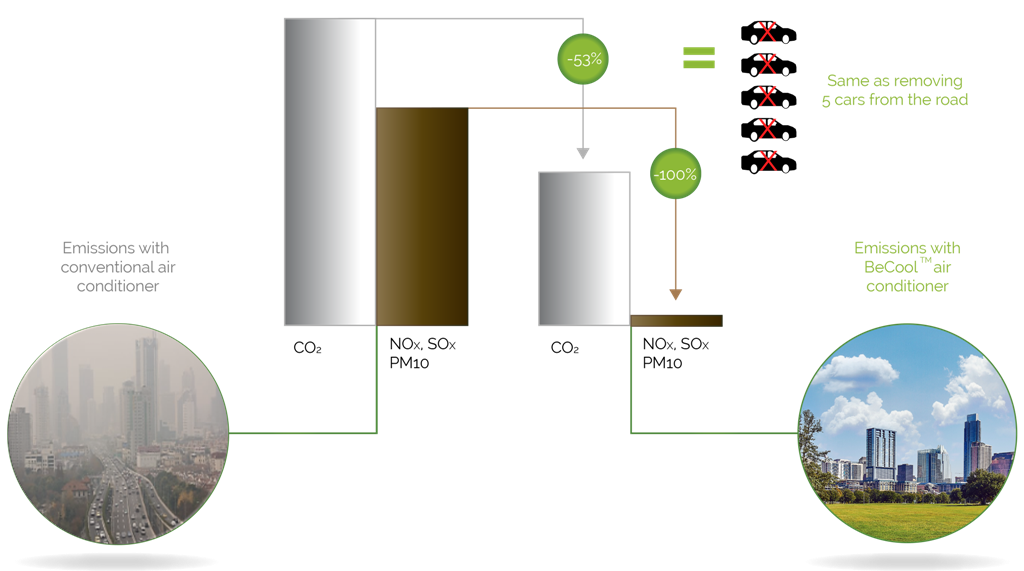 Be Power Tech plans to start field testing by 2017 with operational units on the market by 2018. However, any claims that the mechanism can provide cost earnings should undergo heavy scrutiny until an operational device can prove the metrics claimed. Nonetheless, other similar operational units currently in use have proven to reduce operational costs by upwards of 30% using a variant of the device. Many companies are already reducing costs by using just the indirect cooling mechanism. Some are even powered by a generator and can actually produce excess energy.

One such example is currently in use within one of eBay’s data centers. The building requires a total of 8 megawatts to power the facility, 6 of which are provided by 5 Bloom Energy Servers which operate in much the same way as the BeCool system. Where the device differs, however, is through their mechanism of recycling the excess heat and utilizing it again to initiate the cooling sequence, providing a more efficient device.

If the BeCool system turns out to be valid, it could absolutely revolutionize the cooling industry and contribute a major helping hand in energy reduction. However, it does not go without flaw as the natural gas does release some greenhouse emissions. While the device is not perfect, it is a significant step in the right direction.