Airbus announced that it was canceling production of the world's largest aircraft, the A380, after Emirates Airlines canceled several orders for the plane.

Airbus announced today that it would be ceasing production of the A380 jumbo jet, with deliveries ending in 2021 after the Emirates airline, based in Dubai, UAE, slashed its orders for the aircraft, currently the world’s largest.

Making the Call to Retire the A380

“It’s a painful decision,” said Airbus CEO Tom Enders, as reported by CNN. He told analysts on a conference call that “we’ve invested a lot of effort, a lot of resources and a lot of sweat into this aircraft.”

The end of the A380 could mean the loss or relocation of as many as 3,500 manufacturing jobs over the next three years. Airbus operations span several European countries.

At the cost of $25 billion, the 14-year-old plane could carry as many as 853 passengers, and Airbus hoped it would become a major shuttle between major airport hubs, but this isn't what ended up happening.

“We need to be realistic," Enders said. "With the decision of Emirates to reduce orders, our order backlog is not sufficient to sustain production." 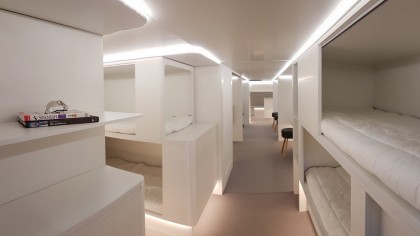 Airbus Wants to Put Beds in Plane Cargo Holds by 2020

“Emirates has been a staunch supporter of the A380 since its very inception,” said Sheikh Ahmed bin Saeed Al Maktoum, the Chairman and CEO of Emirates Airline and Group in a statement released by the airline.

“While we are disappointed to have to give up our order, and sad that the programme could not be sustained, we accept that this is the reality of the situation. For us, the A380 is a wonderful aircraft loved by our customers and our crew. It is a differentiator for Emirates.”

The first flight of the A380 occurred in 2005, and it officially entered service in 2007, just when the oil shocks of the mid-aughts rattled airlines about their susceptibility to price swings—crude oil prices constitute about a third of an airlines operating expenses.

As a result of these price spikes, airlines began moving towards lighter, more cost-effective airplanes and routes that left little room for a behemoth like the A380. Much like the Hummer, oil prices ultimately put an end to the A380s career before it ever really got off the ground.

It is telling that the only airline that made a significant investment in the A380 was Emirates, based in Dubai, where crude oil is plentiful. That even Emirates had to cancel orders of the A380 in favor of smaller, lighter aircraft tells you much that you need to know about the impossible situation the Airbus A380 was in.

World's Largest Astronomy Museum Mimics the Motion of the Universe