It brings a company immense happiness and confidence when their new technology or products perform well in their first attempt. But how awesome would it be if the product performs well and breaks a world record in the process?! We are talking about Airbus’ Zephyr S here!

The Zephyr S is solar-powered lightweight aircraft made by Airbus that runs purely on solar power. The aircraft doesn’t need a pilot as it is controlled remotely.

The result is a drone that can fly for extended periods of time without refueling or pilot change. Hence Airbus calls it High Altitude Pseudo-Satellite (HAPS).

The Zephyr was developed by a company called Qinetiq which is now owned by Airbus. The aircraft took flight on July 11 from Arizona and maintained flight for over 25 days.

In the process, it broke the world record for the longest continuous flight on earth’s atmosphere. The previous record was set by an earlier prototype of Zephyr, and it stayed in the sky for 14 days. To be exact, the Zephyr S stayed in flight for 25 days, 23 hours, and 57 minutes after takeoff.

As the specifications of Zephyr S goes, the unmanned UAV weighs less than 75kg and has a wingspan of 25 meters. The propulsion is provided by 2 rotor fans connected to an electric motor.

The aircraft works by harnessing solar power using solar panels embedded on the surface of the plane.

What Makes Zephyr an Interesting Piece of Technology?

The Zephyr S houses an HD optical camera or IR video recorder to get high-quality images of the ground. It also has AIS or Automatic Identification System to scan the ground with increased precision.

Apart from taking photos of the ground, the Zephyr S can monitor the ground to spot various elements. It will provide the military with invaluable information.

Another piece of tech that the Zephyr S carries is the broadcast equipment that can send signals at the speed of 100 Mbps. The Zephyr S can help provide internet access to places that don’t have solid internet fidelity. 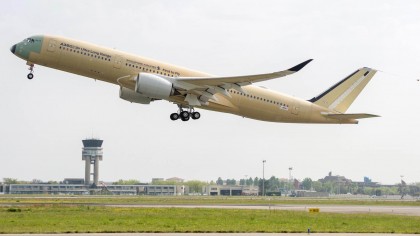 The Zephyr S flies through the Stratosphere (70,000ft) making it immune to weather and air traffic. Even though it flies above the weather, it can communicate with ground control effectively.

Currently, there are two products under the Zephyr Series. They are Zephyr S and Zephyr T. The Zephyr T is a more robustly build aircraft that is double the weight of the Zephyr S.

The weight came from an increased wingspan and added techs like RADAR, ESM, and LiDAR.

“This very successful maiden flight represents a new significant milestone in the Zephyr program, adding a new stratospheric flight endurance record which we hope will be formalized very shortly. We will in the coming days check all engineering data and outputs and start the preparation of additional flights planned for the second half of this year from our new operating site at the Wyndham airfield in Western Australia,” said Jana Rosenmann, Head of Unmanned Aerial Systems at Airbus.