Smartphones with text to speech capabilities changed the lives of many with visual impairments. While listening to a screen being read is perfect for text messaging and directions, in more cluttered digital environments like e-commerce, this service can be overwhelming.

Descriptions are read before the listener can decipher what they want. E-commerce giant, Alibaba has been working on ways to improve smartphone experience for the blind. Its $15 billion R&D initiative Damo Academy has collaborated with China’s prestigious Tsinghua University to develop a unique answer in the form of a cheap silicone sheet that goes on top of smartphone screens.

Cheap technology will be given away

The plastic sheet which costs as little as RMB 0.25 or 3.6 American cents each to produce has three mini buttons on each side. These small dimples are sensory enabled and allow the user to trigger commands in the text to voice function allowing the user to request to “go back” and “confirm”. 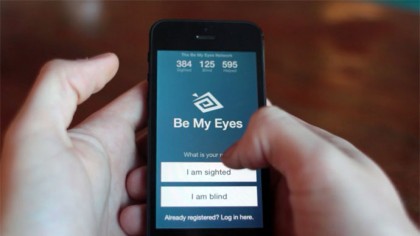 “It’s much easier to shop with the sheet on,” said Li Mengqi, one of the one hundred visually impaired or blind users to trial the technology. The shortcut buttons remove the risk of mis-clicking and simplify interactions with the screen.

“We thought, human-machine interaction can’t just be for sighted people. Besides voice, touch is also very important to the blind, so we decided to develop a touch feature,” said Chen Zhao, research director at Damo Academy. “Unlike with regular apps, it’s hard to beta test Smart Touch because the blind population is relatively small.”

Alibaba has indicated it won’t sell the film, rather will distribute it for free for its brick and mortar outlets. Many tech companies are working on technology that helps people with visual impairment access services to improve their lives.

Google has developed the Lookout app that helps visually impaired people ‘see the world around them. The app is designed for use on Google Pixel phones that are worn on a lanyard around the user's neck or in a pocket with the camera facing out; the app tells the users what and where objects are around them.

For example, when facing a sofa, the app will speak ‘sofa at 12 o’clock.’ Similarly Microsoft's Soundscape App assists people in getting around a city through audio cues. The app calls out shops names and street names to the users via headphones to allow them to build a mental map of their surrounding.

A ‘beacon’ function, will navigate a user towards a preselected address or landmark. In all these instances the tech companies are working with visually impaired people to make sure the technology works for them. This might be the most exciting part of this new sector. So rarely in tech development are targeted audiences consulted with right from the beginning. Let's hope it keeps coming.