July 20th, 2018 is the 49 year anniversary of the first moon landing, but why have there been no manned missions since 1972?

On July 20th, 1969 history was made. This date marked the first successful manned mission to the moon, with the Eagle lunar module touching down on the moon's surface at 20:17 UTC. The following day, Neil Armstrong became the first man to walk on the surface of the moon, inspiring a whole new generation of astronauts.

As we inch ever closer to the 50th anniversary of that momentous occasion, it begs the question - why have we stopped traveling to the moon? What seemed like the beginning of a new era of exploration 49 years ago was sadly short-lived, and the last manned mission to our closest satellite was in 1972.

To mark the 49th anniversary of the Apollo 11 landing, we'll be looking at the mission itself, following lunar efforts, and the reasons why we haven't been back to the moon for almost half a century.

The Apollo 11 was launched from the Kennedy Space Center on Florida's east coast on July 16th, 1969. With Neil Armstrong, Buzz Aldrin, and Michael Collins aboard, it passed behind the moon on July 19th and entered lunar orbit. The craft completed 30 orbits, allowing the crew a view of their landing site in the southern Sea of Tranquility. This site was chosen based on data from the Lunar Orbiter and Ranger 8 and Surveyor 5.

On July 20th, the Eagle lander separated from the Comand Module, Columbia, and began its descent to the surface of the moon. The Eagle had just 25 seconds worth of fuel left when it touched down. The entire world watched in awe as the first manned moon mission safely and successfully touched down on the moon's surface.

Apollo 17: Bringing an End to Man's Exploration of the Moon

After all the promise and excitement of the Apollo 11 mission, it seemed that more manned missions to the moon were sure to follow. And for at least three years, they did. NASA saw a small, but significant, series of missions reach the lunar surface again between 1969 and 1972.

1972 saw the launch of the Apollo 17, which would prove to be man's final foray to the moon. It was launched after midnight on December 7th, making it the first manned night launch of a U.S. rocket. The mission broke records for longest time spent on the surface of the moon, longest time in lunar orbit, and longest total extravehicular activities.

Despite the success of this, and previous Apollo missions, the White House had originally planned to cancel the Apollo program after Apollo 15. Apollo 16 and 17 managed to go ahead as planned, but ultimately after 1972 NASA was faced with too many obstacles to allow their manned lunar missions to continue.

For over 30 years, the fate of manned lunar missions seemed uncertain. It wasn't until NASA's Constellation Program that manned missions to the moon appeared to be possible once more. In addition to its goals to complete the construction of the International Space Station, the Constellation Program sought to bring another successful manned mission to the moon by the year 2020.

RELATED: WHY IS IT TAKING US SO LONG TO GET BACK TO THE MOON

The program was predicted to run from 2005 until 2025. Unfortunately, the program only officially ran until 2009, and was officially shelved by President Barack Obama in 2011. Though the Constellation Program was designed to be one of NASA's most cost-effective programs, with an emphasis placed on converting lunar soil into either fuel or breathable air to reduce mission costs, it simply proved to be too expensive to continue.

NASA originally estimated the cost of Constellation at $230 billion for the entire twenty-year duration, though it was difficult to arrive at an exact figure due to the experimental nature of the equipment needed. When Obama took office, he declared that the program was too expensive, too delayed, and lacking in innovation. Once again, any dreams of putting humans on the moon were dashed.

Cost and Interest: Explaining Why We Haven't Returned to the Moon

If you cast an eye over the history of space exploration and missions to the moon, you'll begin to see that there are two main reasons why we have yet to return to the lunar surface.

To put it in the most simple terms, there simply hasn't been enough money or interest to put towards manned moon missions since 1972. The Apollo 17 mission preceded a major oil crisis, that had many questioning the need to divert valuable funds and effort into space exploration.

Furthermore, interest had waned since the first moon landing. As landing on the moon had no real, practical applications or benefits, it failed to maintain public and political support.

It was easy to rally around the dream of putting a man on the moon when it was part of an intense scientific and innovative race against the USSR, but as the Space Race wound down so too did widespread interest in leaving the planet. At the height of the Apollo missions, NASA received almost 5% of the U.S. Federal budget. Today, it receives just 0.4%.

Ultimately, the progress required to put a man on the moon in the first place, paired with the enormous amounts of labor and capital, simply weren't sustainable.

A New Hope: Exploring the Future of Lunar Landings

Thankfully, we've come a long way since 1969, in more ways than one. For starters, we no longer have to depend on government agencies when it comes to space exploration. The past decade has seen the rapid progression of privately-owned space exploration enterprises, who are keen to do everything from bringing tourists to the surface of the moon to establishing Martian colonies.

Elon Musk's SpaceX is just one company with plans to transport people to the moon once more. The company has been planning commercial tours to the moon for some years now, though these plans have been delayed as of late. 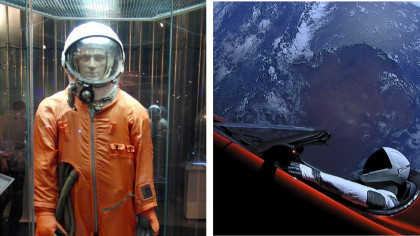 This isn't the only moon mission in which SpaceX is involved, however. Recently it was announced that the first ever Israeli moon mission is expected to launch by the end of this year, helped in part by SpaceX. The planned mission was announced earlier this month by SpaceIL and Israel Aerospace Industries, who plan to transport their lander via a SpaceX Falcon 9 rocket.

That said, SpaceX could have some competition when it comes to the next manned mission to the moon. Rival company, Blue Origin, also made an announcement earlier this month wherein they laid out their plans for a series of moon landings beginning as early as 2023.

Though no one has stepped foot on the moon for almost 50 years, we might not have to wait much longer before we take another giant leap for mankind.

Thanks to the efforts of private companies, governments need no longer sacrifice large percentages of their budgets for the sake of lunar missions. A sense of excitement is beginning to bubble its way through the general public too, as companies race amongst themselves to see who will be the first to make their mark on the cosmos.

Far from the politically charged climate of the original Space Race, this new, corporate space race is presenting space exploration as a project necessary for the progression of mankind. No matter who gets there first, we all win.

The coming years will have no shortage of exciting missions to capture the imaginations of the next generation of space explorers. After half a century of looking to the moon, mankind could walk on the surface once more.