The Smog-Free Tower filters out the smog in the surrounding air to create a healthier cities. The dutch designed tower has already been used in cities across the globe.

Smog and air pollution are notorious problems in various cities around the world.  Just to name a few, places like Mexico City, Beijing, Cairo, and Krakow suffer from a large blanket smog. Beside impeding vision, smog has various health effects on people. According to the EDF, or Environmental Defense Fund, smog irritates people's airways increasing the risk of serious heart and lung diseases. Smog itself is a potent cocktail of pollution created by industrials pollutants, automobiles, open burning, cigarette smoke, and incinerators.

Artist and designer Dan Roosegaarde has created a product that not only helps clean up the air in cities but also repurposes the smog into gemstones. His Smog-Free Tower is helping cities and their citizens breathe clean air again.

In conjunction with Roosegaarde's studio, Studio Roosegaarde, the Smog Free Project is a series of urban innovations purposed to reduce pollution in cities across the world, while providing, "an inspirational experience of a clean future". The Smog -Free Tower is part of this series.

In short, the Smog-Free Tower is a massive vacuum cleaner. Towering at seven meters the tower sucks in smog in the surrounding area using studio's patented positive ionization technology. It sucks the smog in from the top of the tower and releases the filtered air via the six-sided vents. Using no more energy than a water boiler you may find in your kitchen, the smog-free tower can essentially clean more than 30,000 cubic meters of air per hour.

The Roosegaarde studio breaks down how the tower works on their Kickstarter page by stating, "By charging the Smog Free Tower with a small positive current, an electrode will send positive ions into the air. These ions will attach themselves to fine dust particles. A negatively charged surface — the counter electrode — will then draw the positive ions in, together with the fine dust particles. The fine dust that would normally harm us, is collected together with the ions and stored inside of the tower. This technology manages to capture ultra-fine smog particles which regular filter systems fail to do."

The innovation does not stop there. Using the same smog collected in its vents the air-purifier turns that smog into wearable "smog gemstones". The tower takes the carbon particles collected and condenses them, creating fashionable little cubes that can be embedded in various pieces of traditional jewelry. Every cube create contains 1,000 cubic meters of air. 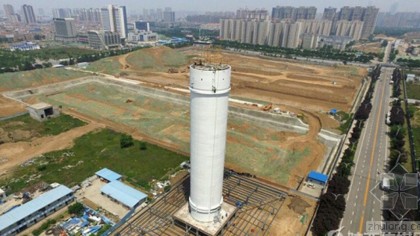 The Smog Free Tower debuted in Rotterdam in 2015 and then was tested in four Chinese cities. This February, the tower will be used in Krakow, Poland to tackle the cities growing smog problem.