On Monday, Amazon will open its long-awaited Spheres, a massive set of domed work spaces, to the public.

Online retail giant Amazon, like many other global industry leaders, it diversifying its services, partnerships, and scope of work in surprising and refreshing new ways: an example is its recent trial of an automated grocery shopping experience set up in Seattle, which has been a smashing success.

Its newest effort, however, benefits the people working for the company directly. Amazon has been working on a group of 3 massive glass spheres which will be housed inside of their Seattle-based headquarters. They are essentially large, underground terrariums that will house "hundreds of plants from all over the world,"—40,000 in fact—providing "a direct link to nature" for its employees. They take the concept of urban escape to a totally new level (no doubt the company's number of job applicants will also increase after it opens).

Given the staggering variety of plants inside, the choice of a dome was made to maximize and most effectively utilize sunlight amounts. Amazon partnered with architecture, design and planning firm NBBJ to execute their ambitious workspace vision—they have also worked with the company on a set of urban revitalization projects in the last 5 years.

Dale Alberda, one of NBBJ's principal architects discusses how the design took on a visionary approach, even from the beginning: "The question was, how do we do this in a significant way," adding candidly, "Just bringing plants into the office wasn't going to cut it."

Amazon had been rather tight-lipped about the final design but has been offering some pre-opening tours in recent weeks. There will be a big unveiling of the space on Monday, with the city's mayor in attendance as well as the governor of the state, Jenny Durkan and Jay Inslee.

A few specs about the impressive trio of spheres:

On the challenge of putting together the hybrid workspace and conservatory, David Sadinsky, one of the architects at NBBJ, said, "We were definitely in a lot of uncharted territory," adding optimistically, "There weren't a lot of places to draw from." 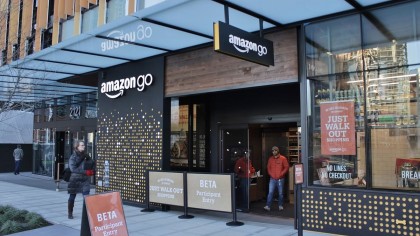 John Schoettler, Amazon's Head of Global Real Estate, who also oversaw the project, captures in a few words the company's objective: "This structure is about thinking big and thinking long term." Though Amazon is not the only company to realize the boost to creativity, relaxation levels and overall employee satisfaction that comes with integrating nature into the building design, it has carried this idea on the largest scale, and in subtle ways, is also reinforcing its image as a firm with a truly global presence: employees can stroll past Philippine rhododendrons, Brazilian grape trees, or a forty-year-old Australian fig tree.