Amazon has begun testing a fleet of fully-electric autonomous delivery robots. The wheeled cooler-sized robots called Amazon Scouts will begin deliveries in Snohomish County, Washington this week. The robots were devised by Amazon and can roll around their delivery routes at a walking pace.

The six-wheeled boxy bots have an array of sensors that help it navigate the suburbs, detecting obstacles, pets, and people. In a demo video released by the logistics giant, Scout is seen trundling along the sidewalk before stopping in front of its designated delivery location.

Scout gets started in Snohomish County

Here we see the downfalls of Scout. It can neither tackle the front steps leading to the house nor can it actually deliver the package. A human is still required to come out of the house and physically collect the package from inside Scout. 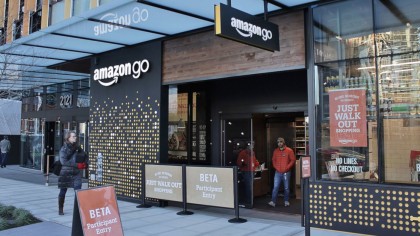 Amazon says they are initially testing six Scout devices which will be accompanied by an Amazon employee.

The robots will deliver during daylight hours Monday to Friday. If you live in Snohomish County, you can get a delivery from Scout by ordering, as they normally would, through the Amazon app or website.

Though don’t be disappointed if an old fashioned human turns up. Amazon has said regular deliveries will continue alongside the Scout pilot program.

Snohomish County Executive Dave Somers expressed his excitement about his home turf being selected as the Scout test site: “We are delighted to welcome Amazon Scout into our community. Similar to Amazon, we are always looking for new ways to better deliver service to our residents. From the latest Amazon innovation to cutting edge technology, Snohomish County is a great place for entrepreneurial creativity.”

As online shopping becomes the primary mode of consumerism for many, particularly in the U.S, delivery and logistics technology is a fast-growing market.

Students get pizza delivered to their desks

Amazon isn’t the only company to use little robots to deliver.

Starship Technologies has introduced a fleet of wheeled robots to George Mason University for efficient delivery of pizza, doughnuts, and coffee. 25 robots have begun work on the campus that can deliver food ordered from Blaze Pizza, Starbucks and Dunkin’ for a $1.99 fee.

An on-campus convenience store is also participating in the program with more stores and vendors expected to join.

The chunky robots can’t manage to climb some steps, which makes them slightly slower than a human delivery person but seemingly much more entertaining.

University campuses in the U.S are required to have ramped access to all facilities which enable s the robots to move around almost anywhere.

As they get used to the campus layout, the robots will begin to select less busy areas to navigate on, making them more efficient over time.

They are designed to be “super deferential” stopping if they detect any sort of obstacle.