The news of Amazon receiving a patent for employee-tracking wristbands could be the last straw for a company that is trying to salvage its image with its employees.

Though we are not even 2 months into 2018, Amazon, it seems, has been coming under fire for a number of reasons. Last month, it was push back against plans to develop the automated and checkout line-free Amazon Go, after the success of its Seattle pilot store tryouts, creating fears that automized labor could lead to a massive loss of income for cashiers.

This time, however, it’s for an entirely different, and might we add odd, reason altogether: according to the US Patent Office, the company has secured a patent for a wristband that can be used to track the hand movements of warehouse workers.

The patents were published on January 30th. Essentially, they would serve the purpose of emitting either radio transmissions or ultrasonic sound pulses. The setup for the second band would involve the placement of ultrasonic units throughout the facility, a corresponding ultrasonic unit for the band itself, and a module for processing the interaction between them. Diagrams in the patent also indicate a haptic feedback module, which could be used for quick transmission of messages to employees.

Amazon Go Senior Technical Program Manager Johnathon Cohn filed patents for the ultrasonic band, while Amazon Robotics Chief Technologist Tye Brady appears to have filed for the second one. As expected, the announcement is not being received well, with security and privacy concerns being raised. Amazon released a statement to calm the growing concerns and shift the focus towards its intended use as a labor-saving scheme:

An Internal Dispute at Amazon is Becoming Public

The common theme from both the perspective of Amazon as well as its employees seems to be undermined trust. The company feels that some of the delivery workers’ actions have threatened their image with their customers, while on the other hand scores of workers have cited unrealistic and overly ambitious delivery schedules as well as being pushed too hard at the work site. BBC One’s “Inside Out” program even took a look at the conditions in Britain by conducting an undercover investigation, citing the Amazon Logistics device named the “dora” or the “rabbit” used for tracking and plotting routes combined with delivery shifts exceeding 10 hours led to some workers falling asleep at the wheel, potentially putting their own lives in jeopardy:

“It was definitely one of the hardest jobs I’ve ever done, the route that’s programmed by Amazon is very difficult to achieve because of all the things that aren’t factored in, like traffic and customers being out. I just found it impossible to do the route in the time they think you should be able to do it,” one of the BBC undercover reporters shared. This is one of the dozens of similar accounts given.

Judging by the public relations (PR) crisis that the documentary started for Amazon, who countered by asserting that its employees “do not spend more than 10 hours per day driving”, these bracelets could be a warning from the company, as the expression goes, to “not bite the hand that feeds you”. 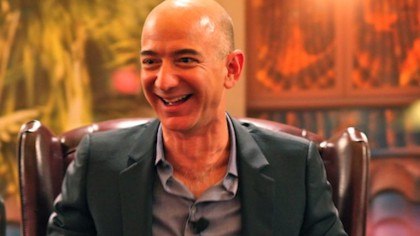 Putting aside the issues of workplace satisfaction and company image for a moment, the larger reality is that there is enormous demand for the services—and products—which are made available through transactions. The company netted 136bn USD in sales in 2016 alone, representing a 27% increase in only one year.

Whether or not Amazon decides to put the bands into use, the public drama playing out with its workers will continue to occupy the same spotlight as the company for foreseeable future.

Via: US Patent Office, Statista, BBC