Amelia Earhart: Life and Mystery of the World's First Female Pilot Who Crossed the Atlantic Ocean

Amelia Earhart's mysterious disappearance in 1937 has been revived lately with new evidence discovered after 81 years. But what really is behind her story?

On July 2, 1937, the Lockheed Electra piloted by Amelia Earhart, mysteriously vanished over the Pacific Ocean without leaving a trace. 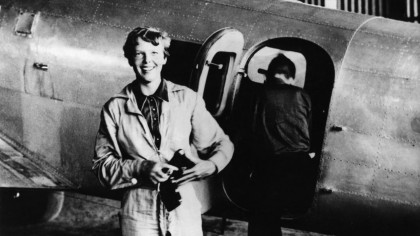 She was 39. The aviatrix and her navigator, Fred Noonan, had set course to circumnavigate the globe. Three weeks later, an S.O.S. distress signal was picked up in Los Angeles.

Despite U.S. President Franklin Roosevelt ordered the biggest research rescue operation in the history of the United States, no wreckage was ever found.

Amelia Earhart and Fred Noonan were declared missing presumed dead, or dead in absentia, on January 5, 1939. She would have been 41. Amelia Earhart's disappearance is considered the greatest aviation mystery of all times.

Amelia Mary Earhart was born on July 24, 1897, Atchison, Kansas. She was named after her two grandmothers, Amelia Otis and Mary Earhart.

"Never interrupt someone doing something you said couldn’t be done."- Amelia Earhart

When she was 10 years old, Amelia saw her first plane, but she was not impressed. “It was a thing of rusty wire and wood and looked not at all interesting,” she said, unaware of what her future would bring. It was not until a decade later, after attending a stunt-flying exhibition that she became seriously interested in and passionate about aviation.

Amelia’s grandmother, Amelia Otis, died in 1911. This particularly affected Amelia Earhart as she had been her grandmother’s favorite and namesake.

Amelia Earhart graduated from Hyde Park High School in Chicago in 1915, excelling in mathematics and science, before attending college in Ogontz near Philadelphia in 1916, where she played hockey, studied French and German, and continued to excel in her classes.

In 1918, in the middle of her second year, she left school to serve as a Red Cross nurse’s aid in a military hospital in Toronto, Canada, where her sister Muriel lived, during World War I (WWI).

In her free time, Amelia and Muriel enjoyed watching pilots in the Royal Flying Corps train at the local airfield. WWI ended in 1918. Amelia was inspired by those pilots she admired. Later in her life, she became an inspiration to others herself.

After the war and back in the United States in 1919, she took an all-girls auto repair class in the spring in Northampton, Massachusetts. In the fall she enrolled at Columbia University in New York as a pre-med student.

The event that changed her life forever was when World War I pilot Frank Hawks gave her a ride on his plane at the Daugherty Field in Long Beach, California. “By the time I had got two or three hundred feet off the ground, I knew I had to fly,” said Amelia later. It was December 28, 1920. She was 23 years old.

Amelia Earhart took her first flying lesson on January 3, 1921. It was the first of a series of lessons she took with female flight instructor Neta Snook. Amelia worked in a photography studio and as a filing clerk at the Los Angeles Telephone Company to help pay for her flying lessons.

In only six months she managed to save enough money to buy her first plane. She could afford a second-hand Kinner Airster, a two-seater biplane.

Due to its distinctive bright yellow color, Amelia Earhart named her first airplane The Canary. On December 15, 1921, Amelia Earhart passed her flight test, earning a National Aeronautics Association license. Two days later, at the Sierra Airdrome in Pasadena, California, she flew The Canary in her first flight exhibition at the Pacific Coast Ladies Derby.

On October 22, 1922, Amelia Earhart set her first aviation record as the first female pilot to rise an altitude of 14,000 feet at Rogers Field under the auspices of the Aero of Southern California. Previously, Amelia Earhart had set a record mark flying a 2,600-mile non-stop flight in 19 hours.

Amelia Earhart was granted her airline pilot’s license by the Fédération Aéronautique Internationale on May 16, 1923. She became engaged with Sam Chapman in the same year and also sold The Canary, Amelia’s first beloved airplane.

In 1924, she bought her second Kinner airplane. However, she sold it shortly thereafter to buy a Kissel roadster car, which she called Yellow Peril. She returned to Columbia University also in this year.

Amelia Earhart's short life was characterized by accomplishments, perseverance, and a strong will. In 1928, she became the first woman to cross the Atlantic as a member of a three-person air crew.

" Women must try to do things as men have tried. When they fail, their failure must be but a challenge to others." - Amelia Earhart

In 1932, Amelia became the first aviatrix to complete a solo non-stop flight across the Atlantic Ocean and second aviator to repeat the feat only after aviator and environmentalist Charles Lindbergh, who flew from New York to Paris in 1927 in his monoplane, Spirit of St. Louis.

Amelia Earhart took off in Newfoundland, Canada, crossed the North Atlantic, and landed her plane in Northern Ireland traveling 2,000 miles in just under 15 hours. Back in the United States, Amelia was the first aviatrix to be awarded a Distinguished Flying Cross by the U.S. Congress for her solo transatlantic crossing.

In 1935, Amelia Earhart successfully completed a solo flight from Wheeler Field in Honolulu, Hawaii to Oakland, California. It was the first flight ever of its kind. She won a $10,000 award for this accomplishment.

In 1937, Amelia announced her most ambitious project ever: to fly around the world. Unfortunately, she could only complete two thirds of the flight before radio contact with her was forever lost. Since then, and for over 80 years, it has been difficult to determine what really happened to Amelia Earhart.

Excited about her success, she set herself on a new great adventure: to fly around the world, this time accompanied by Frederick J. Noonan as her navigator.

"Adventure is worthwhile in itself." -- Amelia Earhart

On July 2, 1937, Amelia Earhart and Fred Noonan took off expecting to reach Howland Island, a tiny island on the Pacific Ocean. Twenty hours into the flight, all radio contact with the Electra was lost.

By the time Amelia Earhart and Fred Noonan reached the Pacific island of Papua New Guinea, a month after leaving Los Angeles, they had completed 22,000 miles. They had only 7,000 miles left to complete the totality of the trip. Amelia expected to fly 27,000 miles, a distance that approximates the Equator.

The United States Coast Guard cutter Itasca picked up what were the last radio messages that were going to be heard from the Electra. Amelia Earhart said she was lost and low in fuel. Then, there was silence.

Amelia Earhart: the most beloved aviator of all times, was never found

The new photo evidence was found in a file with documentation about Japanese activities in the Marshall Islands. Another file containing 170 pages with documentation about Amelia Earhart's case is missing. The new investigation recently conducted, after 81 years of her disappearance, seems to indicate that Amelia Earhart and Fred Noonan were captured by the Japanese as spy suspects. They might be incarcerated, tortured, and killed in the Marshall Islands.

From all the memorials and tributes, one of Amelia Earhart's most impressive memorials is better seen from the air.