An Inside Look at the Spy Technology of the Future

Many a science fiction movie and novel has imagined what social surveillance technologies of the future might be like. Some of these could be used to spy on you sooner than you may have thought.

Spy technology has captured the imaginations of people around the world, first through books, then through films. But some people forget that the gadgets and concepts explored through the media are not only the stuff of fantasy.

There are real-life tools that espionage experts use to get intel on nations and people. So what could people expect to see in real life soon?

However, it typically requires relatively clear perspectives of the people captured to identify them. In the future, spies and other people trying to keep tabs on others may not need such clarity. 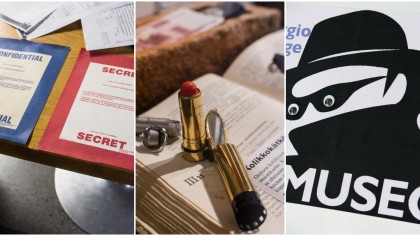 A company called Digital Barriers, founded in 2010, offers real-time facial technology that can identify obscured faces, such as those with scarfs wrapped around them or that are blurred.

The company claims to have a customer base made up of clients from 50 countries, but they won't disclose names.

The enterprise's representatives say that the company was built out of the desire to serve the public sector by offering its technology to government agencies, particularly for counterterrorism purposes. However, it's now increasingly branching out to private corporations.

People are accustomed to seeing security cameras in public places, so they likely wouldn't think twice about seeing a seemingly standard camera in the environment.

And there probably wouldn't be an external indicator that designated a camera as a high-tech facial recognition one that connects to a database of wanted individuals. That means individuals could be monitored with spy tech and not even know it.

Taylor Swift used facial recognition technology at a concert but hid it inside a kiosk showing the musician's rehearsal footage. As people watched, the technology sent their faces to a command center, where analysts compared those images to that of Swift's known stalkers.

Although the spying tech approach was intended to keep the superstar safe, it also raises privacy issues and questions about whether Swift could be responsible in the event of data breaches.

2. Tools That Detect Activity Based on a Phone's Characteristics

Most people don't think about the internal workings of a phone, like those that allow it to sense orientation, for example.

The gyroscope serves such a purpose, and researchers say that component and other sensors could also be tapped into by people who want to learn more about a mobile phone's owner, such as spies.

In one study at the University of Illinois, researchers from the College of Engineering could detect differences in phone signals with 96 percent accuracy.

They said that other parts of the phone, like fingerprint sensors, could make it even easier to determine things about the phone's owner or that person's activities.

Other researchers built an app that let them use gyroscopes to pick up some sound waves by measuring vibrations in the air instead of those just made by phone during normal operation.

Considering that scientists have already built these tools in the lab — and they say they could get better as speech recognition technologies do — it makes sense that spies of the future could use the gyroscope functionality to help them eavesdrop.

Research carried out several years ago by multiple parties working separately proposed that it could be possible to steal someone's password by paying attention to the haptic vibrations emitted by a phone's touchscreen keyboard.

The opportunities to learn things through phones have evolved even further now.

More recent investigations say it's possible to use a mid-range thermal camera to detect the body heat left on a phone's keypad after a person enters a password or other sensitive details.

Considering how widely used smartphones are in today's society, there will likely be a need in the market for spy tools able to interpret things about phones that owners don't even notice.

Artificial intelligence (AI) offers numerous uses in workplaces around the world, and companies are just starting to experiment with the best ways to use it.

However, their interest in the technology is skyrocketing. In 2017, companies spent approximately $22 billion on AI mergers and acquisitions, or about 26 times the amount spent on them the previous year.

A tremendous amount of discussion centers on whether AI will take people's jobs, and concerned individuals might think that at the very least, spies are safe from such a possibility.

That safety is seemingly not the case. Robert Cardillo, the director of the National Geospatial-Intelligence Agency (NGA), envisions a future where 75 percent of the data analysis tasks currently done by spies could be handled by AI instead.

However, Cardillo insists that he wants AI to handle certain tasks so that human agents can take on higher-level responsibilities — he doesn't want to replace humans altogether.

His ultimate goal is to create a "pattern of life" represented by the Earth's surfaces, then use machine learning to understand when that makeup changes.

Some people are critical about being overly reliant on AI, arguing that any algorithm is only as good as the person who programmed it. They point out that mistakes could have global consequences, such as leading to unnecessary wars.

Although the use of AI in espionage is still in its infancy, it seems highly probable that agencies will investigate more ways to use it.

Practiced spies know that while they're undercover, they have to continually gauge aspects of a suspect's body language since it could tell as much as or more than the words a person speaks.

And like there are increasingly advanced facial recognition cameras, other surveillance technology can even detect poses that can indicate bad behavior or impure intentions.

One option, currently used in Japan, is called the AI Guardman, and it knows the stances that people typically take when shoplifting. When things seem amiss, the technology notifies shopkeepers via a connected app.

The company that makes the equipment is targeting big businesses but recognizes that there's a need for such surveillance at smaller establishments too.

Although the company isn't marketing to spies, the way that the AI Guardman can pick up on minor things that might otherwise get overlooked makes it a potentially good fit for people involved in espionage.

Analysts believe technology will be what drives espionage, and the goal of any worthy application is to supplement the abilities of human agents. Body language detectors could do that.

There's the possibility of people getting falsely identified as potential criminals though.

For example, the technology might learn that a person who rapidly shifts their weight while standing could be trying to steal something, but a person might also move that way if they have a mobility impairment and are trying to maintain their balance.

An Exciting Future for Spy Technology

Although it's not possible to know exactly how espionage experts will depend on the things on this list and others, it's evident that technology will help spies achieve their missions.

It may also allow them to diversify their responsibilities as tech takes care of past tasks.