Hydrogen-powered semi truck firm Nikola just announced a deal with Anheuser-Busch to provide the brewing firm with up to 800 hydrogen-electric powered semi-trucks. The news comes the same week as the startup filed a patent lawsuit against rival Tesla.

By  Loukia Papadopoulos
May 05, 2018
Nikolamotor

Hydrogen-powered semi truck startup and noted Tesla rival Nikola Motor Company announced on Thursday that it had secured an order by brewing company Anheuser-Busch of up to 800 hydrogen-electric powered semi-trucks. “The zero-emission trucks — which will be able to travel between 500 and 1,200 miles and be refilled within 20 minutes, reducing idle time — are expected to be integrated into Anheuser-Busch’s dedicated fleet beginning in 2020,” said the statement.

The companies also both took to Twitter to announce the new agreement. Anheuser-Busch took the opportunity to highlight that the deal would result in zero emissions and thousands of jobs.

We’ve asked @nikolamotor to staff up and build us 800 hydrogen-electric powered trucks as part of our mission to convert our entire dedicated fleet to renewable energy by 2025. Zero emissions, thousands of jobs. Our kind of math. https://t.co/i3DZb7x99a pic.twitter.com/c3wZUFKOpm

According to Anheuser-Busch, the deal is part of the brewer’s dedication to its 2025 Sustainability Goals which include decreasing its CO2 emissions by 25%. The newly-acquired trucks are expected to reduce Anheuser-Busch’s carbon emissions arising from logistics by more than 18%.

“At Anheuser-Busch we’re continuously searching for ways to improve sustainability across our entire value chain and drive our industry forward. The transport industry is one that is ripe for innovative solutions and Nikola is leading the way with hydrogen-electric, zero-emission capabilities,” said CEO of Anheuser-Busch Michel Doukeris.

Anheuser-Busch has ambitious plans to convert its “entire long-haul dedicated fleet to renewable powered trucks by 2025.” The company joined the US Environmental Protection Agency’s SmartWay Transport program in 2006 and has since already succeeded in decreasing its energy consumption in American breweries by more than 30%.

“Anheuser-Busch has a long history of investing in progressive, sustainable technology and we are excited to partner with them to bring the largest hydrogen network in the world to the USA,” said Trevor Milton, CEO of Nikola Motor Company. “By 2028, we anticipate having over 700 hydrogen stations across the USA and Canada.”

The deal strikes another blow at rival Tesla motors that had previously seen Anheuser-Busch place an order for 40 its electric semi trucks. The first blow came this week when Nikola filed a patent lawsuit against Tesla. 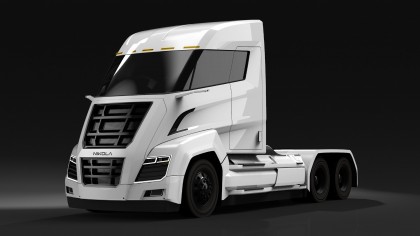 The lawsuit seeks $2 billion in damages and claims that Tesla copied patents by Nikola to create its electric truck. Addressing the incident in a statement to The Verge, a Tesla spokesperson said that it was “patently obvious there is no merit to this lawsuit.”

Nikola seems to have waged an indirect war against Tesla for a while now. For starters, the company’s name is a copy of Tesla CEO Elon Musk’s attribution to the famed inventor and electrical engineer Nikola Tesla.

Nikola has also made jabs at Tesla through its Twitter account. Just this month, the startup poked at Tesla’s financial woes by posting that the newcomer would not “use your money to operate our business.”