Cloning, to some a glimpse of the future, to others a step too far. There can be no doubt, however, that this technology will have important ramifications for your future, for ill or good no one can yet tell. Cloned steaks are currently available on supermarket shelves but cloning is nothing new. Animals have been cloned since 1885 when Hans Adolf Edward Dreisch cloned a sea urchin. Cloning may well be the saving grace for many an endangered species. If you believe in conspiracy theories humans have either already been cloned. There can, however, be no doubt that this is inevitable in the not too distant future.

In the mean-time, we will happily be consuming cloned meat, which in the US doesn't require producers to label as such. Let's have a look at fifteen animals that have been successfully cloned. The following list is not exhaustive and merely a selection of interesting examples for your pleasure.  You're welcome.

An Asian carp was successfully cloned in 1963 and a mere decade later Tong Dizhou also cloned a European crucian carp. We often think of cloning as a modern development so excusing the 1885 example this is actually amazing.

Perhaps the most famous of all cloned animals, Dolly was created artificially in 1996. Dolly lived to the grand old age of six. She was the first cloned mammal and to this day is considered a great success. There have been many versions of Dolly since, which is a little perturbing. The author has fond memories of first hearing of this breakthrough during his formative teenage years. 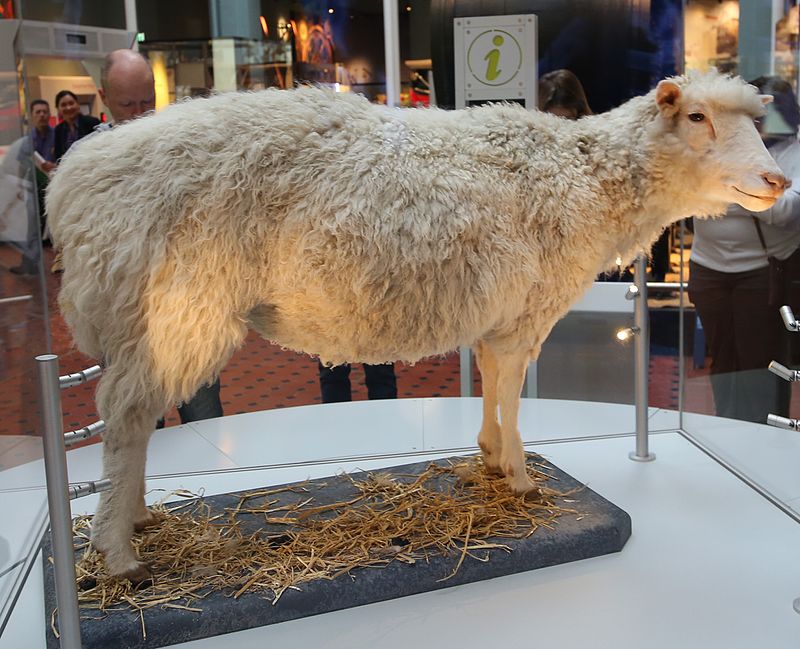 This cheeky little rodent was cloned in Hawaii in 1997. Unsurprisingly, Cumulima was the first successfully cloned mouse. She lived until the ripe old age of two years and seven months. This was a great achievement for her creators.  She produced two litters and was, ahem, later "retired".

The Japanese were quite prolific during the '90s and their cloning program. These two cows were created in 1998 and have subsequently been "duplicated" several thousand times since. Noto and Kaga have paved the way for many other clones engineered to produce improved meat and milk products.

Another example of a cloned ruminant, Mira was cloned in 1998. Mira and her sisters were created in a US lab as predecessors of livestock engineering for the pharmaceutical industry.

6. A Family of Pigs: Millie, Alexis, Christa, Dotcom, and Carrel

This family of clones, if an accurate collective term for clones, were created for modification to allow for human cell and organ transplant. Millie and her copies were created in 2000 by a US based company.

The lab monkey world received its first clone in 2000. US-based Tetra is the first in a series of cloned monkeys that scientists could use as test subjects to learn more about diseases like diabetes.

Guar what now? A Guar is an Asian ox that has been dwindling in numbers. Thankfully, they were succesfully cloned in 2001. Sadly, Noah lived for two days and died of dysentery soon after.

Copy Cat could well be the starting gun for an entirely new industry of pet clones. Created in 2001 Copy Cat, was, well, a domestic cat. Copy Cat was the world's first cloned pet.

Given the never-ending game of cat and, ahem, rat it is only fair to include Ralph. Ralph was one, or is it legion, of three rat pups created in 2002. Ralph's genetic makeup may well be used in research labs in the future. 129 embryos were implanted into two female rats with three being viable rats. Ok, so not a legion of rats, but it sounded cool ok? Is is just me who believes that rats aren't exactly in need of cloning technology?

Mules are sterile right? Not if you clone them! Well yes, they are still sterile but this is a great way of sticking your middle finger up to biological boundaries. Idaho Gem was born in 2003.

No, not Prometheus damn your devious mind unless, well actually yes if you can speak Greek, of course. An Italian team created this cloned horse in 2003. The belief was that they could "mass produce" Italian stallions. Sadly the experiment failed. She was birthed by her own clone source "parent".

Being endangered is not a prerequisite of cloning potential. The African Wildcat was cloned for no other reason than we just can. US scientists used Ditteaux as a template for cloning other, more vulnerable animals.

Who doesn't like ferrets? Surely if any animal was worthy of replication it's these furry, limbed bitty snake beasts? Ok, I might be a bit biased.  Libby and Lilly were cloned in 2004. But why? As it turns out, ferrets are useful for the study of human respiratory diseases. They are still nasty "bitty" furry snake monsters, however. They also smell of pee.