To mark the 45th anniversary of the Apollo 17 mission. Key players from the lunar mission met to reminisce and discuss the future of space travel.

Three key players from the Apollo 17 mission held a panel discussion at the 49th annual Lunar and Planetary Science Conference. Apollo 17 flew to the moon in December 1972, the mission that marked the end of the NASA Apollo program.

The three men remembered fondly some of the highlights from the moon mission including the discovery of orange soil on the moon’s surface and the way the crew repaired the lunar rover with duct tape.

In addition to the walk down memory lane, the panel discussed what the future of NASA’s space program might look like. All three men agreed on returning to the moon is an essential step in the long journey towards a manned mission to Mars.

"There are a whole bunch of operational issues related to not only landing on Mars, but also working on Mars, that we really need to work out closer to Earth, and the moon is a place to do that."

A mission to the moon may be a reality in the wake of Donald Trump's signing off on the Space Policy Directive 1, which instructs NASA to train crew and test equipment destined for Mars on the moon first.

"We've got to go back to the moon for a lot of reasons," Griffin said, "but we've got to get our mojo back." NASA has spent the last several decades focussing on research in low-earth orbit primarily around research connected with the International Space Station.

Planning a mission to Mars will take a huge change in resources including rockets, ground staff, and crew. "Even when we're working on Mars, I think that the science backroom is going to be even more important than it was for Apollo because of the planning activity that's going to have to go on there due to the communication delays," Schmitt said. 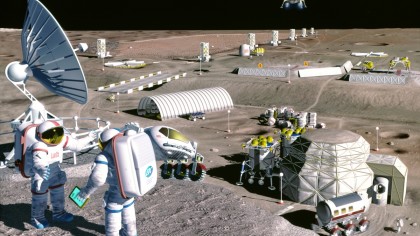 Trump Vows to Send US Astronauts to the Moon Again, Elon Musk Approves

Schmitt suggests doing Mars simulation missions to the moon to make sure crew and equipment can operate under restricted communication conditions. The long delays in communication for missions to Mars is a huge hurdle to overcome.

"You'd need to engineer your landing craft so that you can abort to land [on Mars] and work out the problems there," Schmitt said. "The nice thing about the moon is, you can work most of these kinds of issues out … while you're doing good science," he continued. "So, you get a double return from it when you're doing your preparation for Mars."

Some experts believe lunar missions are just an expensive distraction away from the real goal of manned Mars missions. But the Apollo astronauts have experience of deep space and they all support the idea of returning to the moon, sooner rather than later.

Houston We Have a Problem: 13 Facts About the Near-Disaster Apollo 13 Mission to the Moon