Apple announced today a new credit card built right into Apple Wallet, drawing excitement from some and skepticism from others.

Apple announced its Apple Card credit card offering today at its Show Time event that the company says will improve the credit card experience for consumers.

Apple announced some new expansions beyond its hardware product line today and one of its more ambitious offerings is the new Apple Card credit card.

While there will be a physical card—more on that in a bit—, Apple Card is designed to be integrated into Apple Pay and is promoted as an improvement over the traditional credit card experience.

The application is handled right from the Apple Wallet app on your iPhone and users can expect to receive a digital card account a few minutes after they sign up, which will be usable at any location that accepts Apple Pay. You’ll be able to track purchases, check your balance, and pay your bill right from the app, as well as monitoring the due date and the amount due.

The physical card, made out of titanium, will be linked to the digital card on your phone where all the account data will be stored and can be used at any location that takes credit cards but not Apple Pay. Because all of the account data is on the phone and not on the card, there won’t be any card number, expiration, security code , or signature on the back like there is with other credit cards.

Apple says there will be no fees associated with Apple Card, so no late fees, annual fees, or over-limit fees that are standard on other credit cards. Customers also won’t be hit with a penalty rate if they miss a payment. As far as interest rates are concerned, they will range from 13.24 to 24.24 percent depending on a customer’s credit worthiness, according to The Verge.

The Apple Card will also feature a rewards program where a percentage of every Apple Card purchase is given back to the customer as Daily Cash, which is added to the customer’s Apple Cash card each day and immediately usable through Apple Pay to pay down their Apple Card balance or to send to friends or family through the Apple Messages app.

For purchases made through the Apple Pay app, customers will get 2% back as Daily Cash, as well as 3% back on any purchase made directly from Apple, such as the App Store on your phone or a brick-and-mortar Apple Store. Purchases made with the physical Apple Card will earn the customer 1%.

Apple Card will take advantage of machine learning algorithms and Apple Maps to identify and label transactions with the name and locations of the merchant, as well as categorizing the type of spending and providing a weekly and monthly spending summary.

According to Jennifer Bailey, Apple’s vice president of Apple Pay, the company wants Apple Card to help customers better manage finances over the long term: “Apple Card is designed to help customers lead a healthier financial life, which starts with a better understanding of their spending so they can make smarter choices with their money, transparency to help them understand how much it will cost if they want to pay over time and ways to help them pay down their balance.”

Privacy Said To Be A Major Feature of Apple Card

Apple makes a big deal about their desire to protect user privacy, even if their motivations may not be the most altruistic. In their announcement of the Apple Card, they’ve made a point of telling potential customers that even though Apple Card and the Apple Pay app will be tracking purchases and categorizing their spending into summaries, this data will never leave the customer’s phone.

The issuing bank for Apple Card is Goldman Sachs, who is a powerhouse in the investment banking sector, but has never stepped into the consumer credit card business until now. As such, Goldman says this frees them to build a new kind of credit offering than other banks in the sector have offered in the past, particularly when it comes to the sharing or selling of customer data to third party marketers or advertisers.

“Simplicity, transparency and privacy are at the core of our consumer product development philosophy,” said chairman and CEO of Goldman Sachs, David M. Solomon. “We’re thrilled to partner with Apple on Apple Card, which helps customers take control of their financial lives.”

Mastercard has also partnered with Apple and will handle all of the individual payment processing for Apple Card: “We are excited to be the global payments network for Apple Card, providing customers with fast and secure transactions around the world,” said president and CEO of Mastercard, Ajay Banga.

The Internet Surprises Everyone With Snark, While Others Voice Skepticism

While Apple Card appears at first look to be a solid enough product—Apple, Goldman Sachs, and Mastercard aren’t exactly startups here, they’re three of the most financially stable companies you’re going to find—it wouldn’t be the Internet if there wasn’t some skepticism leading up to the announcement and snark before the presentation had even finished.

Over at Mashable, Morgan Sung gathered a whole collection of Twitter reactions to Apple Card’s announcement that immediately began comparing it to Magnises, a credit card of sorts pushed by the notorious Fyre Festival promoter Billy McFarland—who also emphasized that the card was made out of metal—, before concluding that “If Tim Cook promises Bahamian bungalows and beachfront sets, it's probably time to run.”

Why should I use an Apple Card when I already have Magnises, the ultimate symbol of status?

Others in the financial press also have questioned the Apple Card weeks ago when it was first reported on by the Wall Street Journal, questions that remain unaddressed after Apple’s announcement.

In covering the WSJ story, Ron Shevlin over at Forbes questioned the point of Apple’s newest foray into the credit card issuing business, as it already has a credit card offering through Barclay’s which he suggests hasn’t exactly been a huge success for Apple. 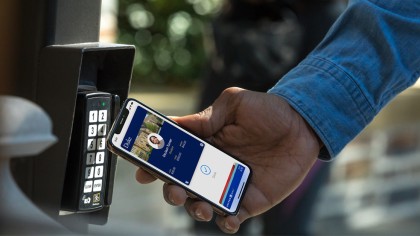 Of the major features reported on in the WSJ, and confirmed today by Apple, none of them looked like game-changing developments for Shevlin.

Apple’s first credit card hasn’t seen a lot of adopters, so he doubts that this newest card will be able to bring in the devoted Apple-only consumer either.

The rewards system is similar to other options on the market, so Apple’s reward system isn’t something that will get the extreme rewards-system gamers to quickly adopt the card when their may be better options out there.

As he rightly points out, credit card companies have had financial management tools available to customers for years and no one really uses them, so it’s doubtful that anyone is going to make the jump to this particular card on that service alone.

According to Shevlin, Apple doesn’t have the kind of data analytical capacity that Google or Facebook have, and as others have pointed out, an Apple Card is going to be generating a treasure trove of user data that other companies would kill to get their hands on, so one of the biggest draws towards issuing a credit card, gathering customer data, isn't really the kind of thing Apple is good at. Besides, Apple says they won’t be able to access your data anyway, since that data won’t touch Apple’s servers and the Security Element built into Apple Pay will keep your purchasing data private.

The huge caveat here is that Apple acknowledges that Goldman Sachs will see this data since they are the bank managing the transaction. Though they promise that they will not be selling your data to a third party, which is a nice gesture, that wouldn't prevent them from using that data internally for other purposes.

People have been assuming this would be the case when Goldman and Apple's partnership was first reported on and it goes a long way toward explaining why Goldman Sachs of all companies is the issuing bank, having never offered a consumer credit card before.

But, if you're going to apply for a credit card, this is somewhat of a moot point. Giving your purchasing data over to the bank will always be part of the deal, but it's nice to know that Goldman is promising that at least it won't be peddling it to advertisers, so maybe there is real, tangible benefit to the Apple Card after all, beyond the fact that its card is totally made out of metal.

Watch As an Apple AirTag Gets Remodeled into a Thin Card