"The new sound of home", Apple's HomePod is the tech giant's latest artificially intelligent hardware product. Standing at only 6.8 inches high the smart speaker automatically responds to all information it detects.

In part 6 of the Apple WWDC 2017 keynote, Tim Cook introduced the HomePod as Apple's way of reinventing home music. Just like how the iPod reinvented music by fitting into one's pocket, the HomePod provides access to the world's largest music catalogs in the comforts of your home. Many spectators were expecting a Siri speaker revelation but instead, Apple stunned us with this elegant device. It's wrapped in a sleek mesh fabric design for both acoustic and aesthetic purposes. Of course, it is controlled via an automatic voice interaction with Siri and has three key attributes.

With the combination of Apple-engineered audio technology and advanced software, the HomePod's main goal is to rock the house. It delivers the highest-fidelity sound from its compacted, elegantly designed structure. The speaker is built with high-excursion woofer outfitted with a bespoke amplifier, which plays a wide range of deep, rich bass sound. Apple integrated their HomePod with an advanced algorithm to constantly analyze the music and dynamically tweak the low frequencies for a fluent, distortion-free sound. To fill up the room it is located in, the speaker is customized with a unique array of seven beamforming tweeters that also concentrates the sound from very narrow beams. This array of beams ensures that listeners can richly hear the music no matter where they are in the room creating an immersive sense of space. 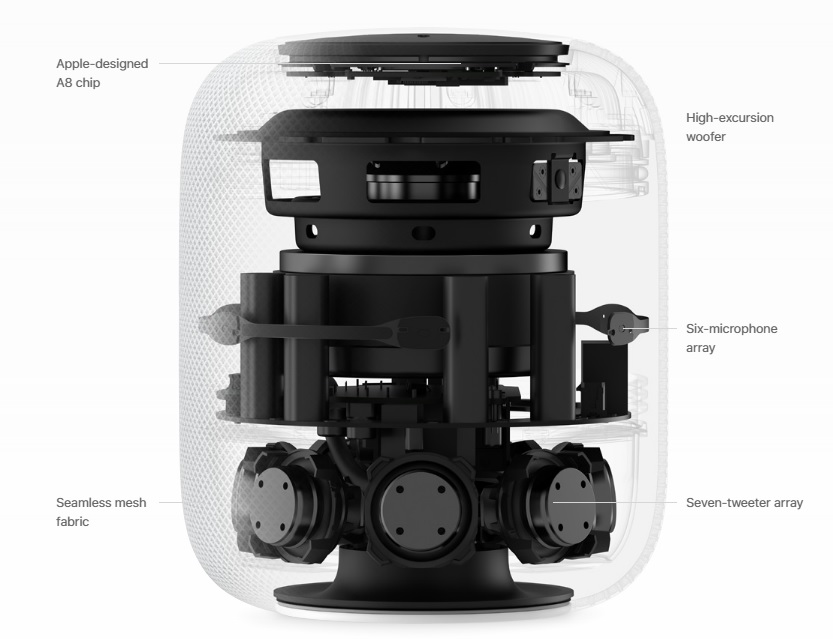 A top button on the speaker can be tapped to play, pause, or adjust the volume. Users can also see Siri listening as the top surface of the device animates the detected voice through an LED waveform. The brain behind this smart device is a powerful Apple-designed A8 chip with advanced echo cancellation technology.

Part of HomePod's AI attributes is its ability to sense its physical location within a room. The smart speaker automatically studies a room's acoustics, adjusts the sound according to its location, then drives the music in the optimal direction. Even if it's against the wall, on a shelf, or at the center of the room, listeners will experience deeply immersive sound experience. Wherever your location is in the room, the speaker will hear you even over the music when you dish out any vocal commands. This is done by the inclusion of an innovative signal processing technology. Moreover, the speaker is highly sensitive to the user's privacy as it is integrated with multiple layers of security, including anonymous ID and encryption, that will surely protect your identity from the external world.

It also detects if you've added another HomePod. The two smart speakers will adjust and balance with one another to create a more lifelike music experience. Or you can plant a HomePod in each room in your house and they will all communicate with each other to produce a home-wide surround system.

Can't decide what music to play? Let HomePod take care of it. The smart speaker works in conjunction with Apple Music so users virtually have access to 40 million songs inside their home. Siri will help search, filter, and find exactly what users want to hear across a vast pool of artists and genres. With the "Share Up Next" feature, multiple people can have control over which music the smart speaker plays. Via Apple Music, the smart device is also capable of learning your taste in music. By talking to Siri and telling her if you like the song you are listening to or not, she can pick out songs for you to play. Some useful voice commands like "Hey Siri, play something different", will fire up the AI device to browse through millions of music options. Other related music information can be answered by Siri if you ask, for example, "Hey Siri, who's the drummer in this song"?

Control your home via HomePod

Apart from being a dynamic music guru, HomePod can also be integrated with a user's daily household questions and tasks. Hook it up with Apple's HomeKit for maximum home command output. With simple voice commands, Siri can turn the lights on or off, manipulate the room's temperature, and even shut the blinds through HomePod.

Users can also interact with Siri, via the smart speaker, about plenty of everyday things like asking about news, traffic, weather, sports, translations, and other general knowledge. You can also send text messages and set up reminders via Siri and HomePod.

So, one last thing you're probably wondering about is how much will this smart speaker cost? In the WWDC 2017 revelation yesterday, Apple announced that this AI device will be priced at $349 when it comes out later this year in December. It will be available in both white and space gray colors.