Apple Watch has been making headlines this month for saving the lives of a teenager and a 32-year-old man.

By  Loukia Papadopoulos
May 04, 2018
Crew/Unsplash

Apple Watch has been making headlines this month and for all the right reasons. It seems the accessory is a bit of a superhero.

This week, WFTS Tampa Bay News reported that the tech-savvy watch saved the life of a local teenager, Deanna Recktenwald, after it alerted her that her resting heart rate had jumped to 190 beats per minute. After rushing to the hospital emergency room, the young woman was told she had kidney failure and could have died if not for the quick intervention.

"It was alarming that the watch was telling us to seek medical attention," said the teenager’s mother Stacey Recktenwald. "I didn't even know that it had the capability of giving us that alert."

The grateful mother wrote to Apple to thank them for their product. “I am forever grateful to Apple for developing such an amazing lifesaving product,” Recktenwald said in the letter.

“If it wasn’t for her Apple watch alarming her about her HR we wouldn’t have discovered her kidney issue. I honestly feel that your Apple Watch has saved my daughter’s life,” the mother added. Apple CEO Tim Cook responded himself and thanked her for sharing her story.

Cook also took to Twitter to express his joy at the recent news. “Stories like Deanna’s inspire us to dream bigger and push harder every day,” said the CEO.

Stories like Deanna’s inspire us to dream bigger and push harder every day. https://t.co/O7xJ9n1MHg

Stacey Recktenwald told ABC she will be buying her own Apple Watch and added that her daughter wears hers even when she sleeps. "She’s so dependent on it because she was so shocked when the doctor said she was in kidney failure," the mother said.

Just days after Recktenwald’s story made news, another Apple life-saving story started making the rounds. William Monzidelis shared his experience with the watch alerting him to a life-threatening condition just in the nick of time.

The 32-year-old man was at work when he started to feel dizzy. He headed to the bathroom where he noticed he had begun bleeding.

It was then that an alert from his Apple Watch told him his heart rate was at an alarming level that required medical intervention. Monzidelis was rushed to the hospital where he kept drifting in and out of consciousness while bleeding.

By the time he was admitted, the man had lost 80% of his blood. He received emergency blood transfusions and was sent straight to surgery, saving his life a the very last minute. 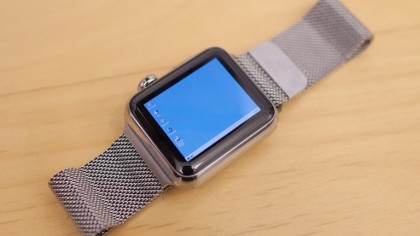 In November of last year, Apple launched a partnership with Stanford Medicine for the Apple Heart Study app, the app responsible for recognizing heart rate and rhythm. “Every week we receive incredible customer letters about how Apple Watch has affected their lives, including learning that they have AFib,” said Jeff Williams, Apple’s COO.

“These stories inspire us and we're determined to do more to help people understand their health. Working alongside the medical community, not only can we inform people of certain health conditions, we also hope to advance discoveries in heart science,” Williams added.