Apple is keeping tight-lipped about a recent patent application for a foldable display, adding to the atmosphere of rumors surrounding its development.

The US Patent & Trademark Office published an official Apple patent application filed for a foldable display. This development may have just confirmed earlier rumors that Apple had been collaborating with LG on a possible foldable iPhone. 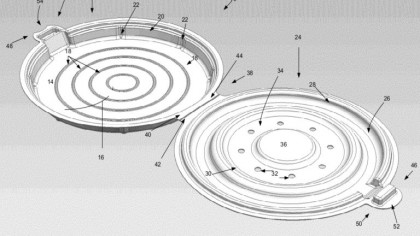 Statements from Apple about the foldable display first began to surface last year among discussions that it would one of a number of companies working with LG. Following this with a report from just last month pointing to Apple’s plans to possibly invest in an LG plant for production. What they both have in common is each contains a reference to an OLED panel, the same technology that is being used in the popular iPhone X. The application itself mentions not only OLED, but also LCD and microLED, which is a rapidly emerging flat panel display technology that by many accounts seemed poised to surpass OLED and LCD in the near future:

One interesting point is that Apple is considering using a shape-memory alloy(SMA)—a metal that “remembers” its shape— to create the foldable effect, offering up nickel titanium or bulk metal glass, “also a liquid metal.” In addition, advanced carbon nanotube structures—mentioned in a previous application—were cited as an effective anti-corrosion material.

In this age in which we have all grown accustomed to dramatic product unveilings involving a buildup with teasers, leaked footage (followed by a vague response from the company involved neither confirming nor denying the existence of said footage), and veiled references to possible partnerships, this latest development with Apple seems right in line with this modern narrative.

Apple, understandably, has a right to protect its brand and make sure that it acts responsibly in releasing information, especially given the fact that Apple has gained somewhat of a reputation for enthusiastically filing patent applications for product concepts that don’t come to fruition. All that being said, however, we can’t wait to see the specs for the foldable display, and we know it would be pretty terrific.

Via: Patently Apple, 9to5mac, US Patent and Trademark Office