ARCA'S new engine, meant for the eventual launch of their Haas 2CA rocket, will make it the first spaceflight of a linear aerospike engine ever.

ARCA Space Corporation just announced that its linear aerospike engine is ready to begin ground tests. The eventual aim for this engine is to install it in the company’s Demonstrator 3 rocket, which was designed to power the first-ever operational single-stage to orbit (SSTO) satellite launcher. Amazingly, the new aerospike engine took merely 60 days to complete from the moment of fabrication.

“The system will perform a series of ground tests that will ultimately qualify the engine for flight. After the field tests, the same engine will be integrated into the Demonstrator 3 rocket that will perform a suborbital space flight up to an altitude of 120 km above the New Mexico desert,” announced the company in a press release.

Two-stage rockets have been used for space launches for the last six decades, mostly because such an approach provides enough fuel to lift a large payload while also maintaining weight. First-stage engines usually don’t work well at sea level, therefore are faulty at higher altitudes or beyond the atmosphere. Different engines are used for each stage of a rocket’s flight.

The aerospike engine is unique in that it uses air to replace half an engine. It works by cutting a rocket engine’s bell in half. An engine bell directs the exhaust of a rocket engine in a singular direction. This halved bell is then placed back to back to form a tapering spike, which kind of resembles an electric shaver. Air acts as the missing pieces of the rocket bell, full of hot gases as they exit the combustion chamber.

As the rocket ascends, thinning air releases its firm hold on the gasses as they spread out, as if the bell has suddenly increased in size. This enables the aerospike to adjust itself during flight, magically transforming itself from a sea-level engine to a space-ready one with unlimited expansion ratios, thereby significantly increasing the specific impulse of the engine at high altitude. 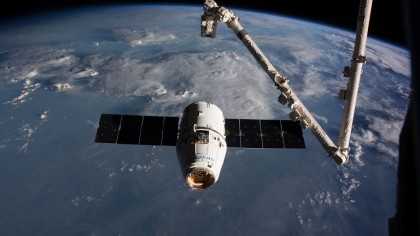 “The engine, with a sea level thrust of 4.2 tons, uses hydrogen peroxide 70% as a monopropellant. Despite low energy propellant, the rocket is able to reach space due to the use of an extremely lightweight tank and high-efficiency aerospike engine,” state ARCA.

After testing, the goal is to develop a working engine for the space company’s Haas 2CA SSTO rocket which will make its first flight from NASA’s Wallops Flight Facility next year. The rocket will mostly work with small satellites at a project cost of US$1million per launch.

Named after the 16th century Austrian-Romanian medieval rocket pioneer Conrad Haas, the 53ft long rocket can launch 100 kg (220lbs) of payload to low earth orbit. According to ARCA, Spaceworks indicated that 3,000 small satellites would launch between 2016-2022 with a total market value of $5.3 billion in the next decade.