A trip to a remote island off the coast of British Columbia revealed a shocking discovery: an ancient village dating back 14,000 years.

Archaeologists have uncovered the remains of an ancient village on the small island of Triquet Island, a remote island which is located off the coast of British Columbia in Canada. The 14,000-year-old village is the oldest ever discovered in North America, and it is a very exciting find for archaeologists, who have been working to establish its link to other artifacts found in the area. In fact, the village is most likely three times older than the pyramids in Egypt!

The tools found date back to the ice age

Most of the objects from the excavation are tools used for a number of purposes, from fire-making to hunting, and forensic evidence dates them back to the ice age. More digging and excavations are in the works as scientists believe that new information will also emerge in the same geographical area and make the picture more complete.

In terms of anthropological links, the remains have been linked to the Heiltsuk people, an indigenous tribe which once inhabited the Central Coast Region in British Columbia, and the find also supports theories about the oral history tradition of the people. William Housty, a member of the Heiltsuk Nation, elaborates: "Heiltsuk oral history talks of a strip of land in that area where the excavation took place. It was a place that never froze during the ice age and it was a place where our ancestors flocked to for survival.”

For archeologists, the find opens a new set of questions which will reshape theories about migration in this region of Canada, particularly the coastline of British Columbia. On the significance of the find, University of Victoria PhD student Alisha Gauvreau—present at the excavation site—shared with the CTV Vancouver Island News: “I remember when we get the dates back and we just kind of sat there going, holy moly, this is old. What this is doing is just changing our idea of the way in which North America was first peopled.”

Archeology: Rewriting the Cycle of History

Archaeology is, for the most part, not a very glamorous field. To become an archaeologist, one must undergo hours of tedious field work, and take part in excavations for objects which may or may not have any historical value, and then there is the never-ending battle with local government about the secure handling, transportation, and documentation of artifacts in addition to creating space for them. 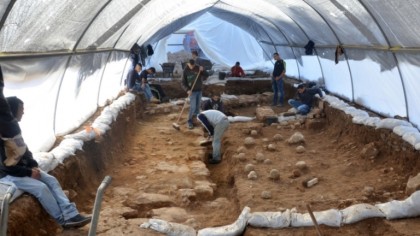 One of the most exciting and dynamic aspects of this discipline, however, is that with each new and significant find, narratives are rewritten, unwritten or freshly created.

Unearthed ancient artifacts start to appear in various countries all over the world in recent years due to the rise in construction projects. Regardless of the astronomical pace that technological developments are occurring in the world today, the efforts of these professionals are keeping the relevance of history alive.