Parisian architectural firm Vincent Callebaut Architectures has proposed a new environmentally friendly design for the roof of Notre Dame Cathedral in Paris, including solar panels and an urban garden that can help feed the city's poor and homeless.

Paris-based architectural firm Vincent Callebaut Architectures (VCA) has proposed a new design for the roof of Notre Dame cathedral that is focused on environmental sustainability, featuring a light carbon footprint, solar power, and an urban garden integrated into the structure.

The design features a glass roof that is a modern reimagining of Notre Dame's original, which was lost in a fire last month. According to VCA, "from the four gables, the original geometry of the 10 meter-high attic has been respected. As we move towards the transept cross, its triangular section and steep, 55-degrees pitched roofs gradually stretch to shape a vertical spire.

"Thus, respecting the inherent principles of descent of the structural loads of the building towards the flying buttresses and the inner fasciculated pillars, the four roofing lines and the four lines of the roof's ribs bend and join together in harmony towards the sky, producing a parametric and light geometry."

Built into the attic, the design features an urban farm capable of producing fruits and vegetables that could feed the poor and homeless of Paris. "Aquaponics and permaculture produce up to 25 kilograms of fruit and vegetables per square meter per year," VCA says. "Therefore, up to 21 tons of fruits and vegetables could be harvested and directly redistributed for free each year. To that end, a farmers' market would be held every week on the forecourt of Notre-Dame."

The structure of the roof itself would be built using carbon fiber and oak beams, not steel, and would use as little as possible to limit the carbon footprint of the structure. The beams would support the glass roof that would incorporate solar paneling that would supply more energy than the cathedral currently needs, feeding the excess power in the surrounding buildings. 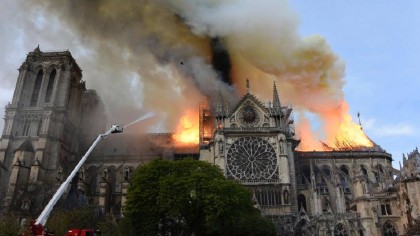 Four Reasons The Notre Dame Fire Was so Challenging for Firefighters

VCA says that "the new wooden frame is covered with a three-dimensional crystal glass dress subdivided into faceted diamond-shaped elements. These crystals consist of an organic active layer, made of carbon, hydrogen, nitrogen and oxygen, which absorbs light and transforms it into power. This energy, stored in hydrogen fuel cells, will be directly redistributed throughout the cathedral.

"To avoid any greenhouse effect, these crystalline scales open at the bottom of the frame along the acroterion of the nave and transept, creating thereby a natural air flow towards the top of the spire which mimics a wind powered chimney. This natural ventilation, whose operation is akin to the interior of a termite mound, ensures excellent aeraulic performance."

The original rooster that sat atop the recently destroyed spire—which was found intact among the rubble—would return to the top of the spire in VCA's redesign. The spire itself, VCA says, "like a shroud raised from the keystone of the transept crossing, evokes the rebirth but also the mystery of the cathedral and the resurrection of Christ. And under the shroud, life and renewal emerge. Notre-Dame dazzles the world again while amplifying her universal message of peace and her spiritual aspiration."

The design, which VCA calls Palingenesis—a Greek term for recreation or rebirth—, is VCA's entry into the international competition for a new design for the roof of Notre Dame Cathedral announced last month by French prime minister Edouard Philippe.

7 Inappropriate and Out of Context Architecture Designs

Engineering of Fire: How to Build the Best Fire Scientifically