Are CubeSensors a Better Mousetrap?

In 2014, TechCrunch teamed with the Consumer Electronics Association and sponsored a competition, Hardware Battlefield. Competitors got free exhibition space at the annual Consumer Electronics Show, and the winner took home $50,000 and a trophy. That winner was CubeSensor, a Slovanian company lead by CEO Ales Spetic, and CTO Marko Mrdjenovič. Now located in the U.K., CubeSensor followed up the win with a $700,000 investment from fellow Slovanian company Bitstamp, (that cash infusion came in the form of Bitcoin, a rare occasion for a start up, indeed!) 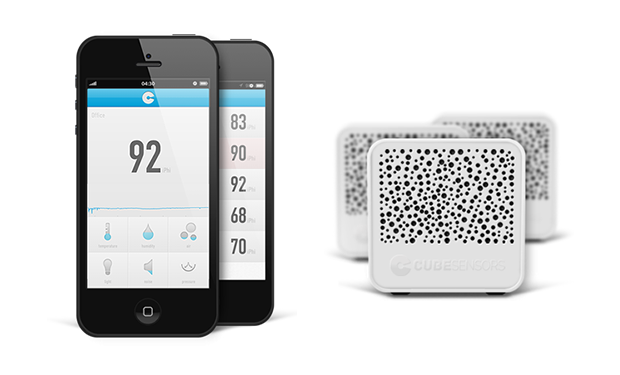 In essence, CubeSensors are a home health monitoring system, a souped up weather station for your indoor environment. The cubes themselves are small and pretty slick looking. They activate by shaking; colored lighting then indicates, in broad strokes, the status of the spaces you're monitoring; a visit to a proprietary app gives specific data about what's bugging the cube in question, and then you can head off and fix it. Each cube houses seven sensors, measuring air quality, temperature, humidity, noise, light, atmospheric pressure, and acceleration. These are not, by the way, cheap tools; an entry level two cube set up will set you back $360, shipped to your door: A six cube rig runs $670 delivered.

What are the benefits of all this technology? That's the on point question, without a doubt. The company touts a laundry list of safety, utility efficiency, home security, other product safety, better health, and the recently added better sleep - That last one slipped into CubeSensor vernacular after a sleep monitoring startup named Sense raised over $2.4 million bucks in a very successful Kickstarter campaign.

There's no doubt that having a decent grip on your environment is a good thing, but to some degree, calling a CubeSensor system a solution seems a bit disingenuous, like attributing health benefits to a weather station. The fact is that this product is a 'system' only unto itself; there's no connectivity to the infrastructure of your home - It can tell you that the lights are on, or that it's humid, but that's it. In an interview, CTO Mrdjenovič was quoted as saying, "If you know what’s wrong with your environment, you can change it for the better." That's true, but again, you have to do the changing, because CubeSensor can't.

Maybe I'm asking too much, but I've had significant exposure to automated environmental controls. I coordinated the installation of such a system, so I know specifically what's out there and what's possible in the commercial realm. That technology not only monitors myriad environmental factors, but manages the subsystems that control those same factors. CubeSensor makes subtle, but extensive references to being able to "monitor and adjust conditions for the better;" they also routinely term their equipment "cutting edge" and "industrial" in quality or feature. This may be a better mousetrap than inexpensive thermometers, hygrometers, and the like, but the fact remains that all they can do is notify you about conditions. To me, 'cutting edge' and 'industrial' imply the capabilities I outlined above; until CubeSensor gets a lot closer to that standard, they'll remain an expensive curio, for my mind.

Get Used to Chip Shortages: They Are Not Going Away Anytime Soon

How Bionics Are Behaving More and More Like Real Limbs