The Arianespace family of launchers is celebrating a massive victory with the successful launch of two satellites. The event marks the 300th mission and the 100th Ariane 5 launch.

The European Space Agency facilitated the launch, and the launch took place from the European spaceport in French Guiana in South America.

“With this sixth launch of the year, Arianespace is proud to have placed its 100th Ariane 5 mission at the service of our American, Japanese and Azeri customers," said Stéphane Israël, Chief Executive Officer of Arianespace.

“It clearly symbolizes the long string of successes achieved by our heavy launcher on the commercial export market, representing more than half of all satellites it has orbited," CEO Israël continued. "We are very honored that Intelsat, a key customer for Arianespace, entrusted us with two satellites on the same mission – the 60th and 61st we have orbited for the American operator since 1983."

A history of success for the Ariane 5

The Arianespace family has three unique vehicles: Soyuz medium launcher, Vega light launcher, and Ariene 5.  However, all eyes were on the Ariane 5 rocket to see how well the design of the rocket has held up in its 20 years.

The Ariane 5 heavy launcher first took flight in 1996, and in its time, it managed to put up some 207 satellites. Today, it launched two very important satellites some 22,000 miles above Earth. The satellites included Horizons 3e, an attempt between partnering companies Intelstat and SKY Perfect JSAT to bring better communications in the Asia-Pacific region.

Upcoming missions and launches for Arianespace and Ariane 5

Ariane 5 has a handful of incredibly significant missions coming up soon. NASA will put the James Webb Space Telescope on the heavy launcher sometime during 2021.

The massive new space telescope venture could be the last hooray for the Ariane 5, however. The rocket is headed for retirement in 2022, according to an issue of Ars Technica. Ariane 6 could replace the vehicle completely faster than anticipated. 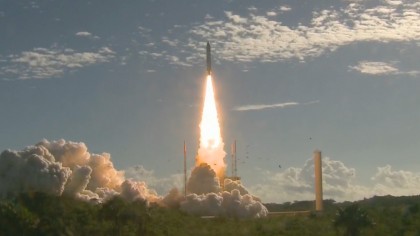 Ariane 6 is expected to reach its full operational capacity by 2023, according to the company.

“My thanks go to all our partners on this latest Ariane 5 success: ArianeGroup and all companies involved in the construction of Ariane; ESA, which provides key support for the Ariane program; CNES, our ground segment companies and all staff at the space center," Israël said in a press statement. "Congratulations to everyone at Arianespace who contributed to this very successful 300th mission by our family of launchers. The Ariane 5 story continues, with its next mission, to the planet Mercury, coming up next month!”