The successful launch of the satellites to orbit is a big step for the Galileo Satellite constellation in delivering a high tech global navigation system for Europe.

Arianespace has launched its Ariane 5 rocket from its South American spaceport in French Guiana today carrying four satellites into orbit. This was the fourth launch of an Ariane 5 this year.

The four Galileo satellites will join 22 other similar ones in space that are used to provide global navigation services for Europe. The mission was also the final launch of the type of rocket known as Ariane 5 ES.

After today’s flight, all future launches of the Galileo satellites will be completed with Arianespace next rocket, the Ariane 6. The Ariane 6 is still in development but is expected to complete its first mission in 2020.

Big build up for successful launch

Arianespace engineers have been working hard on site all week to prepare for the launch. The rocket was transported from the Ariane 5’s final assembly building to the ELA-3 launch pad at the Guiana Space Center on Monday.

The 47-meter tall rockets sat in a mobile platform that was pulled by a diesel-powered tug along dual rail tracks for 2.7 kilometers. Once out at the launch pad, the rocket was set in position and connected to power, telemetry, propellant, pressurant and conditioned air supplies.

Other tasks ahead of today's’ launch included filling of the rocket’s helium pressurization system in preparation for the final countdown. "Here on site, everything is ready," said Paul Verhoef, director of navigation at the European Space Agency said yesterday. “The launcher is ready. The site is ready.”

Galileo Program set to go into full operation in 2020

The launch is a critical step in the Galileo program which is estimated to cost a total of $11.7 billion. Today’s successful rocket launch brings the total number of satellites in the Galileo constellation up to 26.

Once fully complete in 2020, the constellation will comprise of 30 satellites, including 24 operational spacecraft and approximately six spares spread among three orbital planes sitting 23,222 kilometers above Earth. The next launch of satellites will take place in early 2020 on the new Ariane 6 rocket. 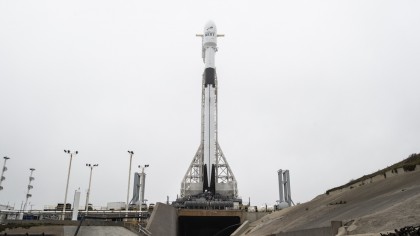 Just two satellites will be launched at a time on board the lighter rocket configuration. “We are happy with what we have at the moment, and with the delivery of the next batch in 2020,” Verhoef said.

Despite some rough starts including two satellites launched in the wrong orbit in 2014, the European Commission is confident it can declare the system in full operational order in 2020. “Not only is the Galileo performance promised to be very good, it is very good,” said Rodrigo de Costa, Galileo services program manager at the European Global Navigation Satellite Systems Agency, or GSA.

The satellites system is also dependent on a lot of ground systems being in place. “This is often forgotten,” Verhoef told reporters Tuesday. “The focus is always that we launch satellites, but I can tell you a lot of the deployment, in reality, is happening on the ground. All of that needs to be ready, included and working together as a system before you can declare any kind of operational capability.”

The four satellites launched today have been given the nicknames Anna, Ellen, Samuel and Tara, the names of children who won a European Commission painting competition. Space enthusiasts all over the world tuned into the European Space Agency’s live coverage of the Ariane 5’s flight.

It was a big day for rockets as SpaceX also launched a Falcon 9 rocket carrying an Iridium satellite just 15 minutes after the Ariane 5 launch.