The insect-built bridge was shared to Twitter by an engineer in Brazil and the footage has since taken the internet by storm.

An electronics engineer from Brazil captured some astonishing footage this week that took the internet by storm. The video features a living hanging bridge made out of the bodies of army ants, also called legionary ants.

Attack of legionary ants (also known as army ants or marabunta) to a wasp honeycomb. Impressive the level of swarm intelligence and collective computation to form that bridge. pic.twitter.com/StvDkmv8x8

Francisco Boni took to Twitter to share the amazing feat of insect-created architecture with the world, referring to the event as the “attack of legionary ants." The species is known for its aggressive predatory foraging groups famous for literally raiding a chosen area.

In this case, the unlucky area happened to be a wasp nest. Boni shared additional follow-up tweets explaining more about the legionary ants' voracious ambush style.

When this type of attack happens, the wasps usually escape and the ants do not leave until they've completely looted the honeycomb, carrying pupae, larvae, and eggs, as well as some adults who did not manage to escape

They can even build across the water! pic.twitter.com/cuQxQbCor0

“When this type of attack happens, the wasps usually escape and the ants do not leave until they’ve completely looted the honeycomb, carrying pupae, larvae and eggs, as well as some adults who did not manage to escape. They can even build across the water!" noted the engineer. 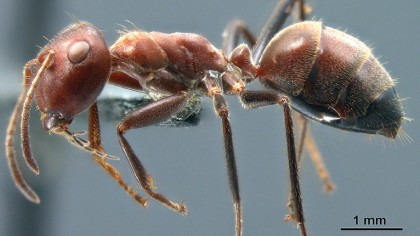 Ever the scientist, Boni continued to further tweet additional responses attempting to determine the causes for the bridge's hanging style and entertaining a variety of hypotheses. He was supported in his speculations by several other ant enthusiasts.

The concept that the bridge's shape came from ants' inability to carry loads upside down was discussed as well as the role that gravity could have played. Boni also suggested the ants may have been trying to avoid congestion.

Hypothesis on how this bridge started to take form, a mini thread: https://t.co/9xb98ANgTN

Getting the experts involved

To quench his followers' thirst for all things army ant related, Boni also tweeted previous analysis in the field by assistant professor of SwarmLab Simon Garnier. The lab is an interdisciplinary research organization dedicated to the study of the coordination mechanisms of large animal groups, including ant colonies.

If you want to learn more about how army ants follow simple rules to build bridges and how they solve the trade-offs associated with it, @sjmgarnier explains it here: https://t.co/eOMVy5eL22 pic.twitter.com/8wkNsnRKsz

Boni's original tweet has already garnered over 30K likes and has over 14.6K people talking. For those of you confused by the more complex scientific jargon, you may want to read this Twitterer's in layman's terms explanation of the bridge.

In laymans terms, once the first few crawled directly across from the edge of the ledge upside down to locate the hive, they had to build the bridge that way as the ants wouldn't have been able to carry the loads upside down using the shorter way the first ants used?

The Engineering Behind How Roman Arch Bridges Work

Leaked Images from U.S. Army Show "Super" Cannon That Can Fire at 1,000 Miles Away