The US Army has a tank capable of assembling a bridge in under 98 seconds.

It is an incredible piece of military hardware and one that needs to be seen in action to be believed.

The AVLB was introduced in 1987 as a combat engineering vehicle to quickly deploy a bridge on the field in under 2 minutes.

The M60 AVLB was developed by General Dynamics to replace the older M48 AVLB vehicle. Like its predecessor, it was designed to deploy bridges for tanks and wheeled combat vehicles to cross trenches and watercourses in war zones.

To date, there are around 400 of them in operation by various national armed forces including Egypt, Iran, Israel, Pakistan and Spain.

Build bridges, not destroy them

The tank can lay a 19-meter (60-foot) bridge over water, trenches, and obstacles allowing passage for other vehicles.

Each M60 AVLB's MLC-60 scissor bridge weighs in at a massive 13 000 kg, constructed almost entirely out of aluminum.

The bridge has a span of 19 meters but only requires half a meter on each side to support tracked and wheeled vehicles of up to a load of 60 tonnes to cross.

Each M60 AVLB is built on top of a modified M60A1 tank chassis. The turret has been removed and replaced with the bridge-launching system.

Other alterations include the relocation of the driver's position further rearward. Some of the series were also modified M60A2 Starship Main Battle Tank (MBT) that had been removed from active service.

This amazingly engineered tank unfolds the bridge vertically and lowers it into place on the other side of a channel.

When the bridge is laid in place, the tank disconnects, drive over and can pick it back up on the other side.

The predecessor M48 AVLB was armored with two 12.7-mm machine guns, but the M60 has no armament.

The M60 is powered by a 750 hp Continental AVDS-1790-2A turbocharged diesel engine capable of reaching speeds up to 48km/h for a range of 460km despite the 51.3-tonne setback.

The tank has been engineered so cleverly that even if the engine breaks, it can be replaced in under four hours, an impressive time for any vehicle.

The bridge layer itself has a torsion bar-type suspension made of six road wheels with an idler to the rear that also has three track return rollers.

Looking at the M60 AVLB predecessor and chassis

The M60 Patton was one of the first main battle tanks built in the USA. Development began in 1957 with it entering service in around 1960.

The tank was primarily designed to combat the formidable T54 and T-55 Soviet medium tanks. These were superior to anything the U.S. had at the time.

The M60 would see various variants built for specific logistical needs for the army in the field. One of which is the M60 AVLB.

The M48 AVLB was similar in many respects to the M60 with the exception of the chassis being the M48 Patton MBT.

M48's were one of three tanks to be officially named after the famed General George S. Patton.

Although the M60 AVLB is currently in active service, it is slowly being replaced by the M104 Wolverine, a similar style tank which has a bridge that can reach five meters further.

The M104 Wolverine began its life during the 1980's with General Dynamics and German MAN Mobile Bridges winning a contract in 1994.

The very first production Wolverines began rolling off the production line and were delivered the US Army in 2003.

Wolverine's are modified M1A2 SEP main battle tank chassis. Like the M60 AVLB, the turret has been removed and bridge-laying gear put in its place.

The Wolverine can carry, deploy and retrieve an MLC-70 class bridge with a 24-meter span.

Unlike the M60 AVLB, the bridge is lowered and laid horizontally instead of vertically. This has the added benefit of allowing the tank to be harder to spot at a distance by the enemy.

The Wolverine was intended to be commissioned to gradually replace aging M60 AVLB's. Especially those attached to engineering battalions, cavalry regiments, and heavy support brigades.

The intention was to order around 465 Wolverines and replace the M60's on a one-to-one basis.

Subsequent budget cuts have since reduced the number purchased to 44 with no intentions of ordering more.

To this end, theM60 AVLB is to remain in active service for some time to come.

Despite the tank's main purpose being a support vehicle for the U.S. Army, it does have non-combat applications. 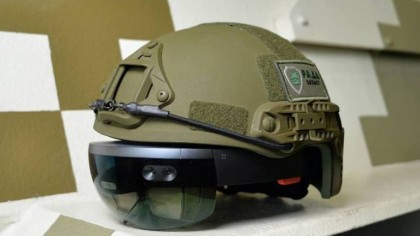 Ukrainian military looks to use Microsoft HoloLens for tanks

During extreme crises such as after flooding and earthquakes that often take out bridges entirely.

The portable bridge provides a quick solution by providing a bridge in extremely remote areas or in areas that have suffered extensive damage.

There are many menacing military vehicles, but the M60 AVLB provides a practical solution to critical problems and can save many lives during quick evacuations due to extreme events.

The M60 AVLB is an incredible piece of engineering and one that is set to be a part of the U.S. and other nation's armies for the foreseeable future.