Artificial intelligence first appeared in cinema almost 100 years ago. Take a look at how it's changed the world.

We may be advancing into a new age of artificial intelligence, but humans have been dreaming about the possibilities of AI for far longer. It was almost 100 years ago when an AI first appeared on the silver screen, and the technology’s prevalence has only grown since then. 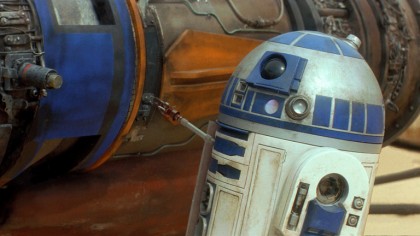 17 Everyday Applications of Artificial Intelligence in 2017

These AI characters vary from big to small, from good to evil, and from anthropomorphic to robotic, but what’s really incredible is that these non-human characters were, from the start, always portrayed as individual nuanced personalities in their own right.

The relationship between humans and AI in the movies is often complicated, much like it is in reality. Throughout the years, we’ve seen film representations of AI that range from benevolent companions seeking to help their human counterparts to hostile machines bent on the total destruction of humankind. Maybe that says something about our greatest hopes and fears for our future, or maybe just what we like to see in our entertainment.

We may not know in which direction AI is currently leading the human race, or how it will help or harm us, but we can gain insight from the imaginings of writers and directors through the decades. Let’s take a look at the cinematic history of AI to see how our view of this incredible technology has evolved.

AI first found its way into cinemas nearly 100 years ago in the 1927 German expressionist film Metropolis. Here the AI takes the form of a humanoid robot intent on taking over the titular mega-city by inciting chaos. It’s an auspicious and perhaps pessimistic beginning for AI in film but tells us a lot about the attitude people of the time had towards this new, “fantasy” technology.

The first AI to appear in an American film wouldn’t be for another 24 years, but this time the portrayal was a bit more positive. I’m talking about “Gort” from the 1951 film The Day The Earth Stood Still. He’s essentially a guardian to the movie’s main character, and is mostly silent, but he is also undeniable a friendly robot, not only with his companion, but with the humans they have come to warn.

These two polar opposite portrayals stood as the primary examples of the technology in the public mind for another seventeen years before the big-daddy of all AI’s came to the screen. In 1968, Stanley Kubrick introduced us to the HAL 9000 in the film 2001: A Space Oddysey. HAL was something completely new. He was alien, calculating, cold, and powerful—but he was also far more human than any robot before him, despite the total lack of a body. He is a fixture of the scenery itself, a literal “God in the machine”, yet over his arc he exhibits pride, growth, and fear, and even begs to stay in the face of his ultimate demise. Hal was nuanced and enigmatic, and is the AI that changed the game forever.

By the seventies the world was firmly entrenched in the space race, America having just sent men to the moon, and film reflected this. Not only did many of the AI’s of this period come from the world of outer space, they were also found in projects that reflected optimism and the promise of new technology. Most importantly 1977’s Star Wars and 1979’s Star Trek: The Motion Picture. These movies showed us the useful, and potentially fun sides of AI with droids and robots, all of whom had their own unique personalities and storylines.

At the same time though, the influence of HAL had not faded, and the seventies also gave us a few of the darker classics of AI, like Westworld in 1973 and Alien in 1979. These films gave us angry, vengeful, and even murderous AIs turning against their creators and seeking to make their own mark on the world. Most importantly though, these marked originated the idea of an AI being indistinguishable from a human on the outside, something that would stick very firmly in the collective consciousness for years to come.

Artificial Intelligence really came into the mainstream in the 80s. Beyond the big-budget summer films like Superman III (1983), Wargames (1983), and episodes five and six of Star Wars, these next films brought us two of the most iconic examples of AI ever.

First was Blade Runner in 1982 which took a cue from Westworld and challenged audiences to question what being human really means and where we draw the line in a world where advanced AI is possible.

Then, of course, there was 1984’s Terminator, which showed us the exact opposite. Schwarzenegger’s cyborg assassin was an AI wearing a human costume but completely without an ounce of humanity. He was brutal, terrifying, and unstoppable. And while the Terminator was ultimately just another action movie villain, the gritty and ruthless way the film treats its AI character would pave the way into the next decade.

The production of AI films boomed in 1999 after years of modest output, partly driven by fears of Y2K. Five AI-focused films were released in 1999 alone. Some sought to reassure the population, while others fed into the panic. Ultimately, the 90s are when AI movies started really branching out.

The 90s gave us two of the seminal modern classics of sci-fi: The Matrix in 1999 and Ghost in the Shell in 1995. Both of these films took the themes inherent in AI into entirely new genres, reinventing the medium as they went.

In another example of just how prevalent AI was becoming in popular culture, this decade also gave us the first children’s movie with an AI main character, namely the Brad Bird animated classic, The Iron Giant (1999). This was a perfect movie (don’t @ me!), that managed to show both the human and alien nature of artificial intelligence. But this lighter side of AI for a younger audience would mark the beginning of a real shift in the film world.

The new millennium: CGI and homage

The 2000s brought an explosion of CGI and along with it an explosion of AI-focused movies, a good many of which were now aimed at a younger audience. Chief among them were I Robot (2004), Transformers (2007), and of course 2008’s WALL-E which showed one of the most endearing robots of all time. He was lovable and helpful and built to fulfill an important role, the most optimistic portrayal yet of an AI.

This decade also finally brought us back to the idea of the disembodied AI operating system but in a distinctly modern way. Matrix Reloaded (2003), Eagle Eye (2008), Iron Man (2008), and Moon (2009) among others all borrow quite a lot from Kubrick’s masterpiece as they integrate the AI into the physical world around the characters in a way that is more consistent with the modern way in which digital assistants and surveillance are interwoven into our lives.

Also, this decade finally gave us a movie that just came out and said it all right in the title with 2001’s A.I. Artificial Intelligence. It only took them 73 years but they finally did it.

Market saturation in the 2010s

Nowadays we are in the golden-age of AI-related movies, whether it’s a minor character or the star of the show, AI has become pervasive in entertainment as the technology’s also gained prevalence in the real world. As such, we’ve begun to see AI characters in nearly every superhero movie, most notable among them being Ultron in Avengers: Age Of Ultron (2015) who holds the title for the highest grossing AI character.

On the other end of the spectrum, this decade has also seen critically acclaimed movies like Ex Machina (2014) which examines the manipulative dangers of a super-intelligence which may have motives we can’t understand. There’s also Upgrade (2018) which goes the novel route of exploring how AI can be used for human augmentation, naturally begging the question of when humanity ends and we become something else entirely, a very important ethical question that the world will no doubt soon be facing.

But perhaps the most revolutionary film of the decade, and possibly the most important AI-centered film ever, is 2013’s Her. Rather than focusing on AI’s effect on the body or the world, it looked at its effect on our souls. It dared to endow an AI with the ability to love, and to do so in a way that was greater even than the film’s human characters, ultimately forcing them to reexamine their own disconnected lives and grow as people. It is one of the most nuanced, 3-dimensional, and realistic views of an AI future that we have ever seen.

With amazing films like this, we can’t wait to see what the next decade will bring!

What can we learn?

The portrayal of AI on film has been constantly evolving from 1927 to the present day. What began as a fantastic imagining of something practically unthinkable for its audience has slowly become an everyday reality for many of us, and as AI weaves itself into our lives more and more, it will continue to expand its presence onscreen as well.

Will we ever know how to handle AI? Will it evolve into something genocidal like Terminator’s Skynet, or will helpful robots like WALL-E and Jarvis harmlessly improve the quality of our lives? Only the future can bring the answers to these questions, but the way we envision this future in our media has consistently given us a glimpse at what could be.

Helping us grasp the boundless potential, moral quandaries, and uncertain dangers associated with creating an entirely new kind of intelligence. Who knows what the next 100 years of AI films might bring, but one thing is for certain; it will definitely be entertaining.