Artificial Intelligence and the Fear of the Unknown

As the Artificial Intelligence market reaches $70 billion by 2020, humans' fear is in the rise. Why do humans fear AI?

Artificial Intelligence (AI) is one of the hot trends in 2019. As we approach 2020, the AI market is projected to reach $70 billion by then, according to the GSMA.

The innovation that AI brings to industry, businesses, and consumers is almost tangible. The new decade is going to be enhanced with more automation everywhere and robotics powered by AI.

Yet, there is a lot of hype and hysteria around the future of Artificial Intelligence and how humans will need to adapt and get used to co-living with it. Indeed, AI is a subject which has been polarizing popular opinion.

Artificial General Intelligence (AGI) is the type of AI that can carry out any cognitive function in the way a human can. The technology is not there yet.  Today, Narrow AI applications such as IBM Watson, Siri, Alexa, Bixby, and others are the ones sharing the world with us. The key difference between AGI and Narrow AI is goal setting and volition.

In the future, AGI is going to have the ability to reflect on its own goals and decide whether to adjust them or not, and until what extent. We have to admit that, if done right, this extraordinary technological achievement is going to change humankind forever.

Yet, there is still a long way to go in order to reach that point. Despite this, many today fear that Artificial Super Intelligence (ASI) one day is going to go beyond human cognition. And even though this is quite likely to happen in the future, it will not be happening any time soon.

Speaking in a keynote session on the topic Digital Trust at MWC Barcelona, Dr. Vivian Chan, Founder and CEO of Sparrho, a company that uses augmented intelligence --a combination of human and Artificial Intelligence-- to democratize scientific knowledge, explained how the hyper-connected world is increasingly creating mistrust and fear over new technologies and policies. However, there is strong evidence showing little support for such anxiety.

Sparrho, founded in 2013, is based in London, England. The company blends Machine Learning and expert curation to help users from over 150 countries stay on top of scientific research. Sparrho's database is made up of over 60 million unique research papers and patents from all fields of science. The company's mission is to democratize scientific knowledge, making it more accessible, searchable, and shareable.

Speaking at the congress, Vivian Chan shared her observations of a world that is facing a massive class divide in terms of trust inequality. She said that there are two groups emerging and visible: On one hand, there is the informed public; in this group, the trust toward new and emerging technologies has been increasing over time. On the other hand, there is the mass population; a group where trust continues to stagnant.

Of course, social media plays a role here as well. Vivian Chan said this isn’t just about consumption but amplification, with people sharing news more than ever and discussing topics relevant to them. Trust used to be top-down, but now it’s established peer-to-peer, horizontally.

Will AI benefit or destroy society?

AI can only become what humans want it to become. Humans are tasked with coding into their AI creations. If the mass population is becoming anxious about AI this is due to fear of the unknown. It is also perhaps due to too little information available out there on the benefits that AI brings in order to balance with those believing AI will destroy society. 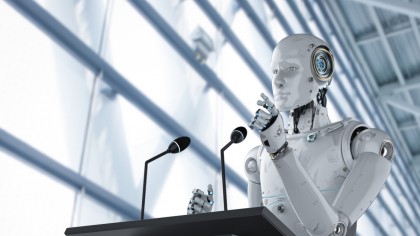 Topics such as Artificial Intelligence and automation are increasingly seen in news and media engagements. Yet, most are creating hype rather than being informative and educational.

Fear AI is fear of the unknown

“We find ourselves at a critical juncture in human history. More than half of the world has access to the Internet, and in theory should have access to the vast and ever-growing body of knowledge, Vivian Chan said during her presentation.

"But in reality, we’re just at the tip of the iceberg. Technology has dramatically improved how we communicate with each other and access information. But at what cost? Have we lost accountability and control?,” she said.

New technologies, including Artificial Intelligence (AI), are often judged by confirmation bias, she explained. In other words, people tend to remember things that support their existing beliefs or their assumptions.

For example, if someone is already suspicious of AI, they are less likely to remember a positive AI story that they read or see on social media. But if bad news is reported, they use it and share it as supporting evidence to back their own beliefs.

Vivian Chan said AI is still very much a mystery. “We don’t necessarily know how the algorithms are classified and how they determine outputs. People want to understand how the decisions are made,” she said.

AI is a means to an end, not an end in itself

Sparrho builds trust with science using Artificial Intelligence to help organizations and the general public stay up-to-date with new scientific publications and patents. As the company expands its database, more people can be better informed of the topics that matter to them.

Thus, they can make better and more informed decisions. The company is working to battle human bias by helping people create a psychological safety net around AI.

This can be done by combining a person’s experiences on how other people think and act on a situation or technology as well as how reliable the information is likely to be, Vivian Chan said.