CEO and founder of R2ai, Yiwen Huang, talks to Interesting Engineering in an exclusive interview about how he started a company where AI creates Machine Learning models and how AI is not going to replace but enhance humans' jobs in the future.

Headquartered in Silicon Valley with offices in Shanghai and Hangzhou in China, R2.ai Inc. is growing rapidly. We sat down with the company's Founder and CEO to talk about AI that creates AI, and how automation is going to affect jobs in the future.

"I found the world of machine learning and computing so fascinating that I decided to switch into computer science. Since then, I've worked for 20 years in this space with data and data management, machine learning, and enterprise software development," he tells Interesting Engineering.

"The reason why I started R2ai is that when I was at Teradata, we actually developed the world's first machine learning platform based on distributed parallel computing architecture, which can train a machine learning model of terabytes of data in just minutes, unlike the traditional ways of doing it that takes weeks. It's really fast in terms of how quickly the machine learning model can be trained."

SEE ALSO: A LOOK AT THE MOST USED TERMINOLOGY AROUND ARTIFICIAL INTELLIGENCE

Despite constant feedback from almost all of R2ai's customers saying how fast and fascinating the technology was, they couldn't find enough machine learning experts to operate the tool. This shows a significant lack of machine learning talent, even though there is so much need for it.

Artificial Intelligence takes the spot as the top game-changer technology, but there is no human talent for it

According to a Gartner's survey of over 3,000 CIOs, Artificial intelligence (AI) was by far the most mentioned technology and takes the spot as the top game-changer technology away from data and analytics, which is now occupying a second place.

“What we see here is a milestone in the transition to the third era of IT, the Digital Era,” said Andy Rowsell-Jones, vice president and distinguished analyst at Gartner.

Indeed, responding to this and the feedback given by R2's customers, Yiwen Huang figured he now had a new mission: To work on a new machine learning development in an operation platform that not only should be fast but also it should be easy to use; so easy to use, in fact, that even non-machine learning experts could quickly learn how to use it.

"So, I had this idea of why can't we use AI technology to develop a new generation of machine learning development and operation platform that can compute models automatically without giving problems in the data set," says Huang.

"That's how we started R2. And that's how we developed R2 Learn, which is a tool now with Software as a Service (SaaS) availability for it. That's how we ended up doing automatic machine learning." Before the SaaS application, R2 Learn was only available on premises.

"So, when in Narrow AI technologies we combine in a very meaningful way then you have something with a very good chance to become a General AI. I think it's a gradual process, step by step."

There is so much new terminology around Artificial Intelligence that one needs to be careful and learn about the different aspects each of them encapsulate.

"The AI space is very broad." says Huang. "You have Machine Learning, which is the most popular trend at this point; but there is also Cognitive AI, that tries to understand and mimic the human behavior and tries to be able to translate the human knowledge into AI. That's the Cognitive AI."

"There's also technology like the Reinforcement Learning, which is part of the Machine Learning, but there is the idea that it is able to simulate. The simulation in a way allows you to mimic the human-like creativity. And then there is also Automatization Technology, that you can put everything together in a very efficient way," he explains.

"The Machine Learning models are typically used for predictive analytics. So, the use cases are pretty broad as well," says Huang. "For instance, in marketing and in customer service you can build a predictive model that can predict what customers like or don't like."

According to Huang, the goal of the tool is to enable people who are struggling finding AI talents. "That's a big point that we have observed in the market space," he says. The tool is also useful for people who want to accelerate the curve of a Machine Learning project.

"Typically, it takes them a month to develop a single model. With our tool, they can do the same thing or even create a better model within minutes or hours," he says.

R2ai's solution was first launched on premises. Recently, the company made it available as a SaaS solution. "The reason why we launched it on SaaS is that we want to make people aware that there is a much better alternative that is out there to what they are doing today."

R2 Learn is the new generation AutoML tool that turns big data into high-quality, sophisticated Machine Learning models in a fast, easy, and affordable way. R2 Learn enables both AI experts and non-experts to develop and deploy AI solutions on their own.

R2.ai is a pioneer in the market with these combined technologies that tackle key AI development pain points:

The technology is actually industry agnostic. It's a generic tool and platform. But the industry has to be ready to go out to do machine learning. According to Huang, one of the conditions is that they need to have the data available.

"So, have their data collected and consolidated. That's when they need the tool to start translating the data into the actual revenue and happy customers. For that step is what the machine learning development tool is required," he says.

For Huang, the industries that are currently most ready for machine learning are life insurance, healthcare, finance, manufacturing, and also telecommunications.

Huang explains that the first SaaS offering of R2ai is based on the Amazon AWS. Being available online people from all over the world can have access to it. The data center of the AWS instance will initially be in North America and in Japan before expanding globally. He says there are two main types of customers who can benefit from using the tool.

The second group of customers include "the ones who want to get into Machine Learning but are intimidated today by the investment and also the lack of machine learning expertise. Those are the customers that benefit a lot from the R2ai SaaS solution and technology."

Pretty much all the industries are using Machine Learning in one degree or another, according to their needs and possibilities. This trend is only going to increase in the next few years.

"That's why we believe we need to make this widely available, so people from all industries can start exploring the possibilities of their data," says Huang.

Businesses and individuals interested in developing their own AI solutions or accelerating slow-moving AI projects are invited to sign up for a free trial. Huang is also happy to offer a free initial consultation to customers who want help on evaluating AI possibilities.

In manufacturing and other sectors, some people are afraid that they may lose their jobs to automation. Even though industry experts and futurists have said that automation is going to create new jobs for those who have prepared acquiring or developing new skills, especially soft skills.

"I guess the purpose of engineering is really to liberate people by automating stuff, by making things easy for people, so they can focus more on the important stuff."

Businesswise I think the most important stuff for them is to solve the business problems other than learning how to use sophisticated machine learning tools.

So, engineering used to develop that tool to make people's job really easy and really fast, more efficient, and boost their productivity. I would say easy, fast, better, and at a lower cost.

"I guess the purpose of engineering is really to liberate people by automating stuff, by making things easy for people, so they can focus more on the important stuff."

"The value of these tools are on how they help the company to generate more value. And how fast they are able to generate that value. There are cost savings aspects but I think the most important area is how I can leverage the tool with my existing resources," says Huang.

Huang reminds us that in the broader sense of industry evolution there is always a process of automation, as we have been observing. "But, in the process we don't see that people are losing jobs because there are always going to be more jobs that will be created," he says.

"Even today, there's always going to be new professions and new jobs to be created. I think the trend is that automation is going to help us to be more efficient to generate more value, more wealth as a society." 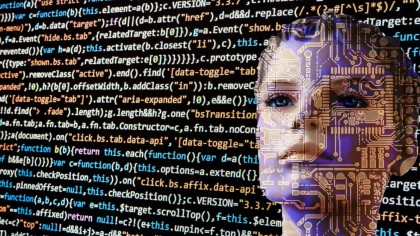 Artificial Intelligence and the Fear of the Unknown

Huang believes that there is going to be a short term of change for some people in terms that they will have to shift into a different domain, career, or industry. "In that sense, we do need to have some job training or repositioning programs in place. But I don't think in general AI is going to reduce the job opportunities at large," he says.

For Huang, it's all about change, learning, improving, and making things easier than before for everyone. It's also about constantly learning new skills in order to remain current to the times we live and the technology that is coliving with us.

"I guess the new skills are going to be more around creativity and human-to-human communications (H2H). I think these are the areas that AI is going to take longer to learn," he says.

"More collaboration is going to happen across departments, sectors, and industries."

"The way that we see AI is to augment people not to replace people. Again, AI's goal is to make people's life easy. And it's going to help people to generate more values, to acquire more knowledge," says Huang.

Huang believes that there is only going to be a potential problem if we limit ourselves in a very contained space. "But the reality is that we are expanding," he says.

This 10-eBook Machine Learning and AI Bundle Is Just $20

Shakespeare's Art Is Still Being Questioned, This Time by Machine Learning