Astronomers retooled a neural network algorithm to sniff out over 300 short radio bursts from a mysterious source in space.

AI systems are helping a team of astronomers sniff out the root of several mysterious radio bursts coming from the depths of space.

Researchers from University of California Berkeley are putting machine learning software in Project Breakthrough Listen, a project dedicated to the search for intelligent life in the universe (aka SETI). The equipment helped the team find 72 short radio bursts from a distance source roughly 3 billion light years from Earth.

The astronomers don’t know the source of the emissions yet. But the AI is helping them craft more informed theories as to where it could be. Their current theories include magnetized neutron stars blasted by gas streams coming from a nearby black hole or technologies developed by advanced civilizations galaxies away from the Milky Way.

Yes, the new machine learning algorithm is being used to look for signs of intelligent life elsewhere in the cosmos.

“This work is exciting not just because it helps us understand the dynamic behavior of fast radio bursts in more detail, but also because of the promise it shows for using machine learning to detect signals missed by classical algorithms,” said Andrew Siemion, director of the Berkeley SETI Research Center. Siemion also serves as principal investigator for Breakthrough Listen, the initiative to find signs of intelligent life in the universe.

Looking for patterns in the radio bursts

Fast, brief radio bursts aren’t uncommon. However, they’re often one-time occurrences rather than repeated instances. This particular series of radio bursts are different. Several astronomers have attempted to figure out the physics and precise location of the bursts because of their repeated nature.

The AI algorithms collected radio signals from data recorded over a five-hour window by the Green Bank Telescope in West Virginia on August 26, 2017.

In total, the AI gathered 400 terabytes of data from standard computer algorithms. In that data, the algorithm identified 21 bursts. Analysis of that data suggested to researchers that the source alternates between “periods of quiescence and frenzied activity,” according to SETI postdoctoral researcher Vishal Gajjar.

However, the researchers wanted to dig deeper.

UC Berkeley doctoral student Gerry Zhang and other researchers developed a new machine learning algorithm specifically designed to reanalyze the 2017 data. They found another 72 bursts not originally spotted in the first round.

Thanks to the AI algorithm, there are now 300 detected bursts associated with the mysterious source.

What this means for Planet Earth

The success of the AI algorithm shows how existing technology can be tweaked to discover more than expected from the universe. 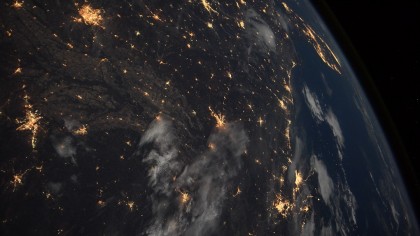 “This work is only the beginning of using these powerful methods to find radio transients,” said Zhang. “We hope our success may inspire other serious endeavors in applying machine learning to radio astronomy.”

As Siemion explained, tracking and measuring these FRBs could lead to a massive discovery.

“Whether or not FRBs themselves eventually turn out to be signatures of extraterrestrial technology, Breakthrough Listen is helping to push the frontiers of a new and rapidly growing area of our understanding of the Universe around us,” he added.