Artificial Intelligence software might still have a way to go in terms of creating 'original' content, but one new AI wrote a black metal album that has even the biggest rock music fans impressed.

The Coditany of Timeness is a black metal album that resulted from a project done by CJ Carr and Zack Zukowski. The album is EP-length at just five songs, but every note and every song title were created by the AI's algorithm.

Like similar AIs which create their own musical compositions, this AI had to break down and synthesize another artist for inspiration. In order to create the album, the AI analyzed the album "Diotima" by Krallice, a New York-based black metal band. Carr and Zukowski then fed the audio segments into a neural network and trained the AI to guess what the next waveform of audio would be. Correct responses led to stronger pathways in the same way that our human brains develop stronger connections between neurons as we learn a new skill or activity.

“Early in its training, the kinds of sounds it produces are very noisy and grotesque and textural,” said Carr in an interview with The Outline. “As it improves its training, you start hearing elements of the original music it was trained on come through more and more.” 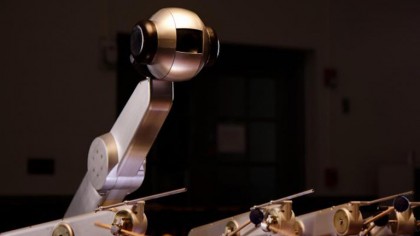 The AI's creators put together their experience in a Dadabots paper titled "Generating Black Metal and Math Rock: Beyond Bach, Beethoven, and Beatles."

“While we set out to achieve a realistic recreation of the original data, we were delighted by the aesthetic merit of its imperfections,” reads the Dadabots paper, which the duo is scheduled to present next week at the Neural Information Processing Systems conference in Long Beach, California. “Solo vocalists become a lush choir of ghostly voices, rock bands become crunchy cubist-jazz, and cross-breeds of multiple recordings become a surrealist chimera of sound.”

As the title of Zukowski and Carr's paper hints, developers have been training AI systems to create music for years. And yes, AIs have tackled Bach, Beethoven, and the British invasion band itself -- the Beatles. (If you don't listen to the lyrics too closely, the Beatles recreation produced by a Sony CSL artificial intelligence program is very convincing.)

"Just play some notes, and the computer will respond to your melody," Google developers noted on the webpage. "You don’t even have to know how to play piano—it’s fun to just press some keys and listen to what comes back. You can click the keyboard, use your computer keys, or even plug in a MIDI keyboard. It's just one example of how machine learning can inspire people to be creative in new ways."

Critics of these programs are quick to point out small issues with the musicality or the music simply lacking a 'human element.' However, AI systems are certainly on their way to becoming a much larger part of the musical realm and even creative processes as a whole.