Artificial Skin Could Give Superhuman Senses

In a new paper in Advanced Materials, researchers at the University of Connecticut describe a new sensor embedded in a layer of silicone skin that can help burn victims “feel” again and even confer some superhuman sensory perception.

Chemists Islam Mosa and James Rusling, of the University of Connecticut, working with University of Toronto engineer Abdelsalam Ahmed, have created a mechanism that can generate a sensation similar to the way our skin feels pressure, heat, cold, vibration, and other physical changes.

Using silicone tubes filled with a fluid made of iron-oxide nanoparticles, or particles less than a billionth of a meter long, and wrapped in copper wire, the researchers were able to create a mechanism that replicates what its like to feel changes in the environment.

What’s more, different changes like pressure, sound, heat, or vibration produce different characteristic movements of the fluid, creating different signals. In this way, a user of the silicone skin could perceive the differences in different kinds of change in the environment. 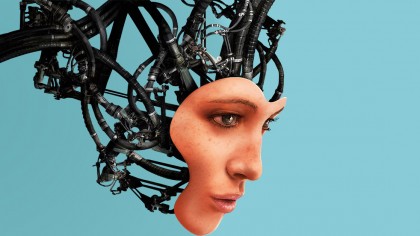 The Transhuman Revolution: What it is and How to Prepare for its Arrival

Human skin has all sorts of mechanisms for detecting its environment, but there are things that human skin cannot necessarily feel. When crafting the new sensor, Mosa hoped it could do more than just mimic human skin. “It would be very cool if it had abilities human skin does not; for example, the ability to detect magnetic fields, sound waves, and abnormal behaviors," said Mosa.

The team found that magnetic fields in particular altered the way the fluid moved in a distinct enough way to be distinguishable from pressure or sound. This opened up the possibility for a kind of early warning mechanism for industrial workers working around very powerful magnetic fields.

The skin is also waterproof, so they also suggested that it could serve as a form of early warning system for parents in case their children fell into deep water, such as a pool.

The next step for the researchers is to create a flat profile for the skin so that it acts more like real skin, as well as test it against heat and cold, though they fully expect to see a response from both, given the impact temperature has on fluid dynamics and electrical conductivity.

The Value of Feeling Our Environment

The sense of touch we feel from pressure, heat, and other stimuli is something that we definitely take for granted as humans, but it is one of the most essential senses we have for keeping ourselves safe. Pain, as unpleasant as it is, alerts us to danger, as does heat and cold.

While it would be nice to not feel the pain of a bad burn, worse still would be to continue exposing our skin to an excessively high temperature that destroys our skin and opens us up to life-threatening infections.

For burn victims, this is a very real problem, since the scar tissue that forms over heavily burned areas loses the capacity to feel these important stimuli.