This Artificial Womb Just Successfully Grew a Sheep, Humans Could Be Next

Researchers have developed an artificial womb to sustain the life of premature babies. That womb just proved successful in animal testing for the first time. This advance could radically transform the lives of millions of premature infants around the world.

The wombs look like nothing too spectacular. They appear more like oversized plastic bags with tubes and fluids rather than the Huxleyan tube babies of science fiction. However, eight of these external womb Biobags held a fetal lamb. During the growth, the lambs developed as their brain, lungs, and other vital organs grew. They grew wool. They even moved about and twitched. A few of the lambs have now grown into adulthood.

The team from the Children's Hospital of Philadelphia hopes to eventually use that technology in humans. The average gestation period for a human baby is 40 weeks. However, in the U.S. alone, over 30,000 babies are born each year younger than 26 weeks old. Those between 22 to 23 weeks only have about a 50 percent chance of survival -- and that's assuming the babies are given all medical treatments available. Prematurity remains the leading cause of death in newborns.

So how do these Biobags function? The lambs were placed in the artificial wombs after being removed via caesarean section at what equals 23 weeks for a human baby. (It's roughly 100 days for a lamb.) The lambs got sealed in the womb. They then linked to a gas exchanger through the umbilical cord, which gave their blood oxygen and nutrients as if they were still in utero. This helped the team overcome what they identify as their biggest obstacle.

"Respiratory failure represents the most common and challenging problem, as gas exchange in critically preterm neonates is impaired by structural and functional immaturity of the lungs," they wrote in the study. 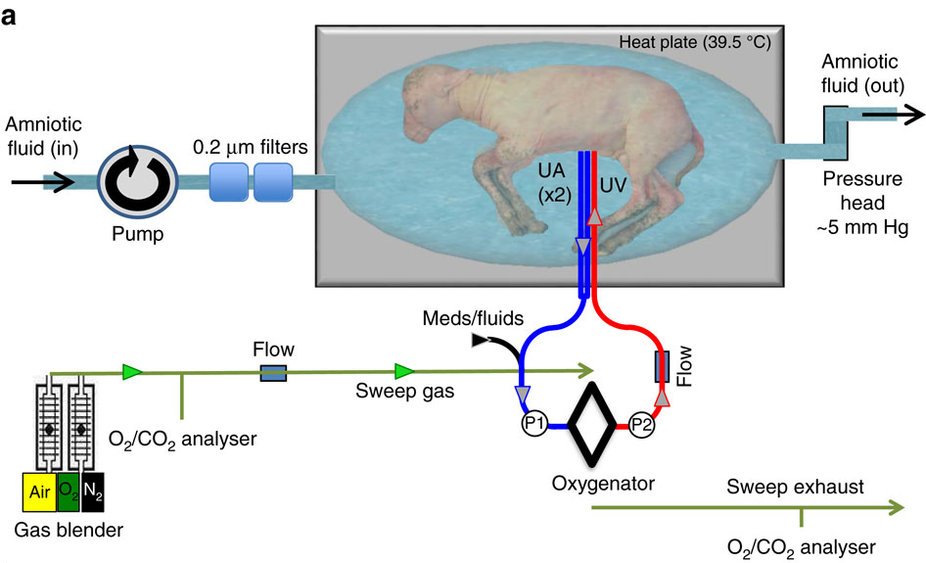 The lambs were in a special amniotic fluid that had chemicals designed to promote growth. In those temperature-controlled bags, the lambs most certainly did grow.

However, the research team is quick to point out that external womb does not replace the mother. Alan Flake, a fetal surgeon at the Children's Hospital of Philadelphia, noted: "It’s complete science fiction to think that you can take an embryo and get it through the early developmental process and put it on our machine without the mother being the critical element there."

However, Flake said the Biobags serve as crucial bridges between the womb and the world -- especially for premature babies between 23 and 28 weeks.

"If we can support growth and organ maturation for only a few weeks, we can dramatically improve outcomes for extremely premature babies," he said in an interview with the Guardian.

The study garnered international attention, including neonatologist Elizabeth Rogers, co-director of the Intensive Care Nursery Follow-Up Program of UCSF Benioff Children's Hospital. Rogers was not involved in the study. However, she said the technology could help parents in decision-making about the future of premature babies.

"One of the unspoken things in extreme preterm birth is that there are families who say, 'If I had known the outcome for my baby could be this bad, I wouldn’t have chosen to put her through everything,'" she said in an interview with the Verge.

While no mother ever wants to need the Biobag, this technology could help aid in better preterm care overall. It also still provides a safety net to give a premature child every chance it can have of survival. That fact never ceases to amaze Flake as he and his team continue to research.

"I’m still blown away, whenever I’m down looking at our lambs," he said. "I think it’s just an amazing thing to sit there and watch the fetus on this support acting like it normally acts in the womb... It’s a really awe-inspiring endeavor to be able to continue normal gestation outside of the mom."

The study was published in the journal Nature Communications. To learn more about the research team behind the project, check out this question and answer session below: