How many times have you seen a static sculpture that feels like it's actually in motion? Have you ever seen a sculptural figure that has water wings sprouting from the back of it? How about a tutu made entirely out of water? Have you ever thought about how fountains are used and what their potential could be?

Every once in a while, you'll come across something that will make you rethink how the world operates and why. Polish sculptor Małgorzata Chodakowska has created very unusual and spectacular effects with the use of fountains in her sculptures. Her sculptures appear to be alive and the illusion is stunning. The figure below sprouts water wings and appears to be in the process of peacefully launching upwards in flight: 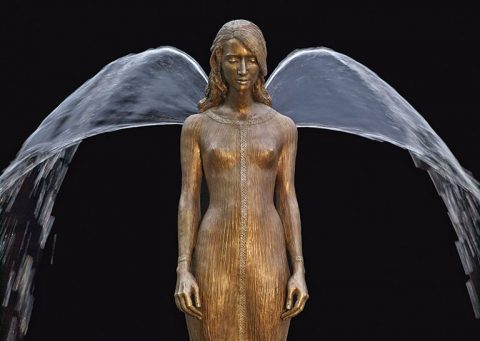 One of Chodakowska's most striking sculptures is the one that features a woman whose hair is thrust upwards with water sprouting out from her motion-filled hair. This gives the illusion that the female figure is in the middle of flinging her hair from side to side. 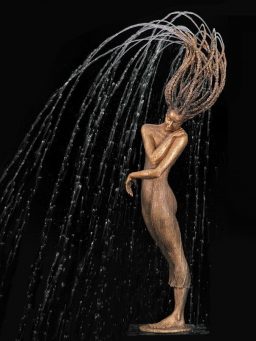 Perhaps the genius of Chodakowska lies in her ability to evoke deep feelings just from using water in the simplest way imaginable. In the sculpture below, see how sharing water with another person taps into some fundamental aspects of what it is to be human: constant need for water, ability to share resources, empathy, humility, generosity and the interconnectedness of life: 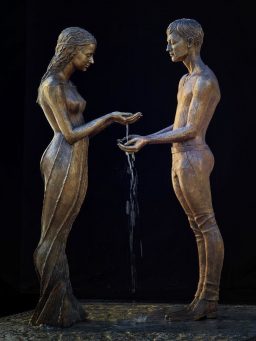 Małgorzata Chodakowska is originally from Poland but has exhibited her works extensively in Germany. She first carves the statue from a large piece of wood from an oak tree, thus forming the general shape. As Małgorzata carves away layer by layer, the large pieces of wood transform into amazing statues. Then the statues are hollowed out and plated with bronze. Next, in order to bring life to the frozen statues, Małgorzata creates small holes in the statues from where the water will emerge. Lastly, she turns on the water and the statues become lifelike human figures, capable of fully mesmerizing whoever happens to be looking at them.

"The sensuous surfaces of Małgorzata Chodakowska’s sculptures exert a magnetic pull on their viewers right down to their ﬁngertips. There is an urge to touch them. An irresistible urge based on the hope that, despite all reason, they might have a living pulse. The visible has been sculpted out of the touchable. The sculptures are so real that they are unreal." ~ Karin Weber

See a large ice cube melting while being held by one of the sculptures, plus see all the other unusual fountain sculptures in the video below:

SEE ALSO: A twist on the fountain with the Charybdis vortex fountain by William Pye

YouTuber Uses Math to Stick to Walls Like Spider-Man